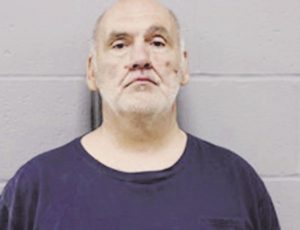 A stabbing incident occurred at a downtown Holden convenience store on Friday, April 3, resulting in several injuries to the victim. Break Time was the scene of the attack, located on S. Olive and 2nd St. in Holden. According to authorities, the suspect, Ronald Worthington, 60, was eventually apprehended at 202 N. Mary St. in Holden. The SWAT team was deployed to the scene and assisted in the arrest of Worthington. The Johnson County Circuit Court’s probable cause statement states that the suspect, Worthington, approached the victim, pulled a small knife and swung it at the victim, cutting him. Court records indicate the suspect cut the victim in the left shoulder and then stabbed him in the left shoulder blade area, leaving a small wound. Allegedly, Worthington had previously made threats to kill the victim and the suspect has an extensive history of assaults, according to court records. Worthington was arrested and charged with a Class D felony of assault in the second degree, according to Holden Police Chief Trent Neal. He is being held at the Johnson County Jail on a $25,000 cash only bond.