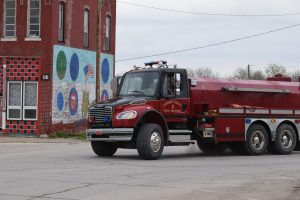 Johnson County Fire Protection District #2 answered a call to a structure fire last Monday, April 6 at 219 NW 1451 Rd., in Holden. Sadly, the fire claimed the life of the resident of the home. According to Fire Chief David Miller, when units arrived on scene at 11:11 a.m., they observed one outbuilding was fully engulfed in flames, and a mobile home was about 10 percent involved. Several nearby propane tanks were also threatened. The blaze was under control about an hour after crews arrived but the outbuilding was declared a total loss. The mobile home had fire and smoke damage to one bedroom and one bathroom, and the entire home suffered smoke damage. The fatality occurred in the outbuilding, no other injuries were reported. Stations #1, 3, 4 and 5 were dispatched first to the scene. Station #2 was added to the call because of the needed manpower due to the second structure being involved. Because this was a fatality fire, the State Fire Marshal, the Johnson County Fire Investigation Unit, and the Johnson County Sheriff’s Department are aiding in the ongoing investigation.