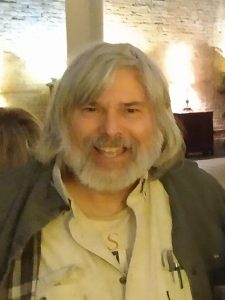 GREGORY MARTIN “GREG” COCHRAN Gregory Martin “Greg” Cochran was born December 10, 1963 in Kansas City, Missouri and departed this life on March 25, 2020 at St. Luke’s Hospital in Kansas City, Missouri, at the age of 56 years, three months and 15 days. Greg was the son of Carl Edward and Sheila Joy (Bailey) Cochran. Greg grew up in Kansas City, Missouri and attended Southwest High School for two years before the Cochran family moved to Peculiar, Missouri where Greg graduated from Raymore Peculiar High School in 1982. After graduation, Greg worked at Solo Cup Manufacturing for 11 years and, at the same time, worked to obtain a degree from Wright Career College. Later he took a position with Paradise Log Homes. On July 27, 1991, Greg was united in marriage to Rhonda Kay Ritter at the Greenwood Christian Church in Greenwood, Missouri. After their marriage, Greg and Rhonda lived in Lee’s Summit for two years, then moved to Belton, Missouri for another two years before settling in Grandview, Missouri, where they lived for 11 years. In 2004, Greg moved his family to Holden, Missouri to make their home. Earlier in his life, Greg had been a member of Red Bridge Christian Church, (Disciples of Christ) where he served as a deacon. After moving to Lee’s Summit, Missouri, Greg became a member of Longview Chapel Christian Church. Later, he became a member of New Hope Baptist Church in Holden, Missouri and, at the time of his death, was an active member of the First Christian Church (Disciples of Christ) of Pleasant Hill, Missouri. Greg took great pride in his family. He was a devoted and loving son, husband, father and brother, always providing for their needs and supporting their hopes and dreams. Greg enjoyed music, singing, and karaoke. He was an avid Kansas City Chiefs and Kansas City Royals fan. Greg enjoyed traveling. He never knew a stranger and made friends wherever he went. Greg is survived by his wife, Rhonda Kay (Ritter) Cochran, of the home; his parents, Carl Edward and Sheila Joy (Bailey) Cochran, of Peculiar, Missouri; two sons, Colin Cochran of Lee’s Summit and Ian Cochran, of the home; two brothers, Carl Wayne Cochran and Jean Cushman of Peculiar, Missouri, and Douglas Cochran of Kansas City, Missouri; brother-in-law, Dale Ritter of Springfield, Missouri; other relatives; and many, many friends. A private graveside service for Gregory Martin “Greg” Cochran was held at the Pleasant Hill Cemetery, Pleasant Hill, Missouri. The family will host a Celebration of Life gathering, in memory of Greg, at a later date. Arrangements were entrusted to Wallace Funeral Home, Pleasant Hill, Missouri.