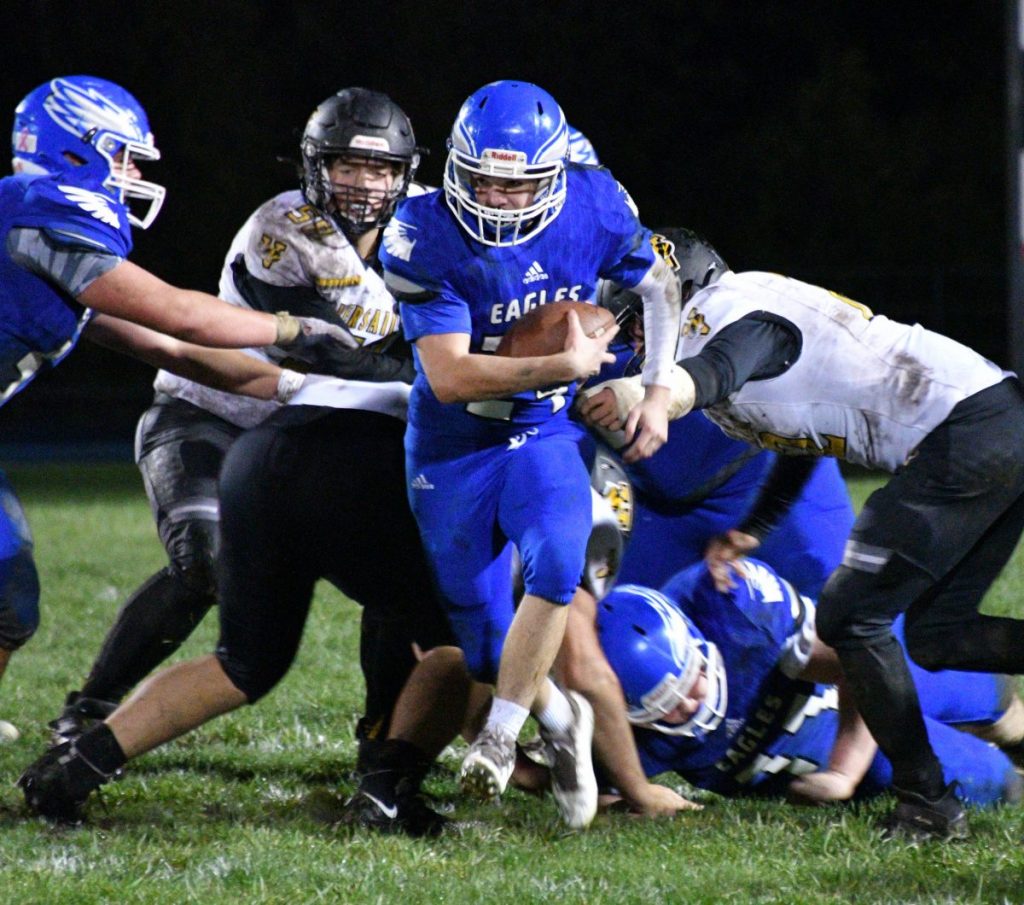 Generous Ground Game… Eagles running back Jayden Davis-Hacker picks up positive yards on a carry during Holden’s first-round Class 2, District 5 football game against Versailles on Friday, October 29. Davis-Hacker rushed for 28 of Holden’s 223 total rushing yards as the Eagles won the game by a 14-0 final score. Photo by Steve Edwards

The Holden football team won its first-round Class 2, District 5 Tournament game over Versailles by the final score of 14-0 on Friday, October 29.
Muddy field conditions led to the Eagles conducting their offense around a heavy ground game which led to Holden gaining 223 of its 247 total offensive yards on rushing attempts.
Six ball carriers tallied the 236 rushing yards with Reco Jenkins and Danny Hartzler finding the end zone for Holden’s scores in the shutout win.
“We had very few missed blocking assignments, and as a result we were able to keep kind of trudging through this mud to keep making yards and first downs,” said Holden football head coach David Diener. “The defense pitched a shutout, but our offense kept them off the field.”
The zeros in the points columns on the scoreboard for each team stood through the first quarter of play, and through more than half of the second quarter.
A 20-play drive that began on Holden’s own two-yard line, and stretched from the first quarter into the second quarter was capped off by a touchdown run by Jenkins.
The sophomore running back put Holden’s first points up on a one-yard plunge into the end zone with 6:38 remaining in the first half. A failed two-point conversion left the Eagles ahead 6-0.
Jenkins’s score eased the Eagles’ tensions as the fifth-seeded Tigers who carried just one win on the season into the game held their ground on the muddy field against the fourth-seeded Eagles.
“It was a big relief to get that first one on there,” said coach Diener of the touchdown from Jenkins. “We went 98 yards, and the play that not everybody remembers is our one completed pass to Higgins on third-and-long. That kept the drive going.”
Eagles quarterback Aiden Morarity’s pass to Higgins for the 24-yard drive-extending play represented Holden’s only yards through the air in the game.
On Holden’s kickoff after Jenkins’s touchdown, Wally Walker recovered the onside kick that was not meant to be for the Eagles.
“We stole a possession on an accidental onside kick, but sometimes the ball jumps your way,” described coach Diener. “We get the onside kick, have another great drive, and just have a very unlucky penalty that is questionable. We got called for a cut block when their guys were cutting us. It as just unlucky. We had to adjust.”
Near the end of the second quarter, the questionable cut block described by coach Diener helped to stall an Eagles drive.
Scoreless possessions from both teams closed out the first half with the score at 6-0 in the home team’s favor.
Following a scoreless third quarter, Hartzler capped off an 11-play scoring drive for the Eagles.
The senior running back carried the ball for a three-yard touchdown with 9:59 remaining in the fourth quarter. Americo Mabrey carried the ball for the two-point coversion to set the final score at 14-0.
“We jumped in a formation we hadn’t shown them yet,” described coach Diener. “The way that the handoffs work, we were able to get an extra number going to it, so we were able to get a hat on a hat and Danny’s able to squirt through there.”
A lengthy, yet empty possession yielded by Versailles returned the ball to the Eagles with 7:17 remaining on the game clock.
A chess match of first downs matched with timeouts marked the final minutes of the fourth quarter.
“We were able to get enough first downs to make them burn their timeouts, and that’s a huge part of that situation,” said coach Diener.
Mabrey punted for Holden on fourth down, and with 2:40 remaining on the clock, the Tigers took over deep in their own territory.
A series that involved one converted first down for Versailles ended on a failed fourth-and-long conversion.
Holden assumed the victory formation to down the ball twice, and end the game.
“The kids played absolutely as hard, and physical as I could have hoped for, and we knew that it would be a physical game,” stated coach Diener in regard to the district first-round win. “It’s absolutely a goal we had. These kids just absolutely practice hard every day, work hard, and deserve the reward that they are getting.”
With Friday’s win, the Eagles football team advances to the semifinal round of the Class 2, District 5 Tournament. Holden faces off against number-one seed Butler (9-0) on the Bears’ home field this Friday, November 6. Game time is 7 p.m.
“They are a very tough, physical, downhill running team, just like us,” described coach Diener of the Bears. “It’s going to be a match-up that we think we’ll be okay on, and be able to compete against an undefeated, very good team.”
Holden Versus Versailles Stats
Jenkins led Holden in rushing with 1 touchdown, and 81 yards on 21 carries.
Hartzler finished with 1 touchdown, and 60 yards on 7 carries.
Higgins totaled 34 yards on 9 carries. CJ Reifstek had 3 carries for 29 total yards. Jayden Davis-Hacker totaled 28 yards on 6 carries.
Higgins had the 1 catch for 24 yards on a pass from Morarity.
Hartzler led the defense with 5 solo tackles, and 4 assists. Mabrey totaled 5 solo tackles, and 2 assists. Reifsteck had 4 solo tackles, and assisted on 1 takedown. Higgins had 3 solo tackles, and 1 assist. Jarrin Brown totaled 3 solo tackles. Garrett Smith had 2 solo tackles.
Posted in News