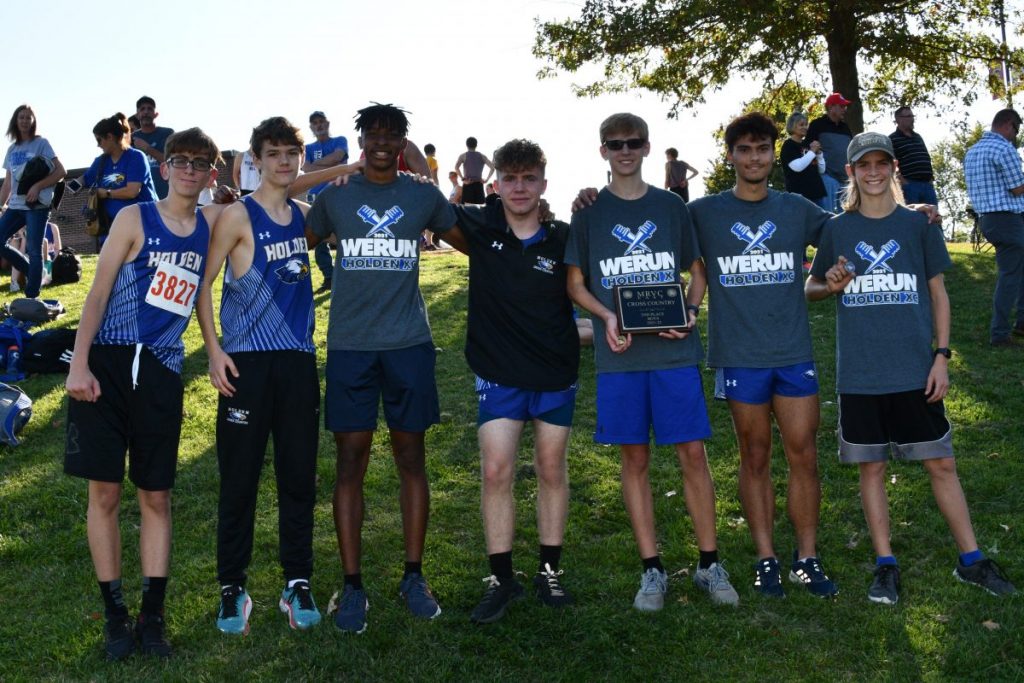 “We had four all-conference runners,” highlighted Holden cross country head coach Dale Wescott. “That was definitely a good thing to see. “The guys laid it on the line. Last year we placed fifth. Last year we didn’t have any medalists.”

The number-one runner for the Holden boys team clocked a time of 18:27 in the race that featured a field of 33 finishers.

MRVC-West runner Drew Balardo was the only runner to place in front of Willis as the East and West races were held together with times and placings sorted out for each afterward.

Lexington runner Alexander Worthing placed second in the MRVC-East race, five seconds behind Willis as the Minutemen would take the first-place team title. “My plan going in was to stay with the guy from Warrensburg because I knew he was going to get out fast, but ultimately, it was to beat the Lexington guy and take first,” said Willis after the race. “It’s a big feat that he is conference champion,” said coach Wescott. “He has come a long way this season.”

Hankins timed out at 19:34 for a seventh-place finish at the conference meet. “It’s just another really good step in his first year,” said coach Wescott. “It’s awesome to have a freshman medal. It’s good to have someone we can count on for three more years.”

Rinella collected the first all-conference medal of his four-year career by placing 10th in a time of 20:10. Rinella finished 15 seconds ahead of Tradjun Moss from the Lexington team. “The plan was to get top-10, so I could get all-conference for the first time,” said Rinella. “It was difficult that second lap, but luckily, I passed that one Lexington guy to get 10th. “It feels amazing to have all these guys get second place, and try their best,” added Rinella who was a sophomore when the Eagles boys team won its first-ever MRVC-East team trophy, also in a second-place finish.

Four-year senior team member Brian Johnson placed 17th at last Wednesday’s conference with a time of 20:54. “We’re going to count on Michael and Brian at district,” noted coach Wescott. Also helping the boys team win its trophy finish at the meet were freshman Ethan Rice who placed 20th, sophomore Lukas Hunt who placed 25th, and freshman Jackson Treece who turned in a 27th-place finish. “It feels good,” said Willis of the Eagles boys team earning a team trophy. “It’s one of my goals for the season, but we’re not done yet. I’m looking forward to districts.”

In the girls’ race, Young placed fifth in the field of 18 finishers by clocking a time of 23:57. “Ava had a great race,” said coach Wescott. “It’s another good stepping stone, and it’s good to have her for three more years.”

MRVC Note: The Missouri River Valley Conference split the conference cross country race into East and West divisions beginning in the 2017 season after years of both sides of the conference competing against one another…

Michael Rinella placed 14th in the field of 58 finishers.

The district meet will be held on the Missouri Western State University campus with the girls race starting at 12:30 p.m., and the boys race beginning at 1:05.