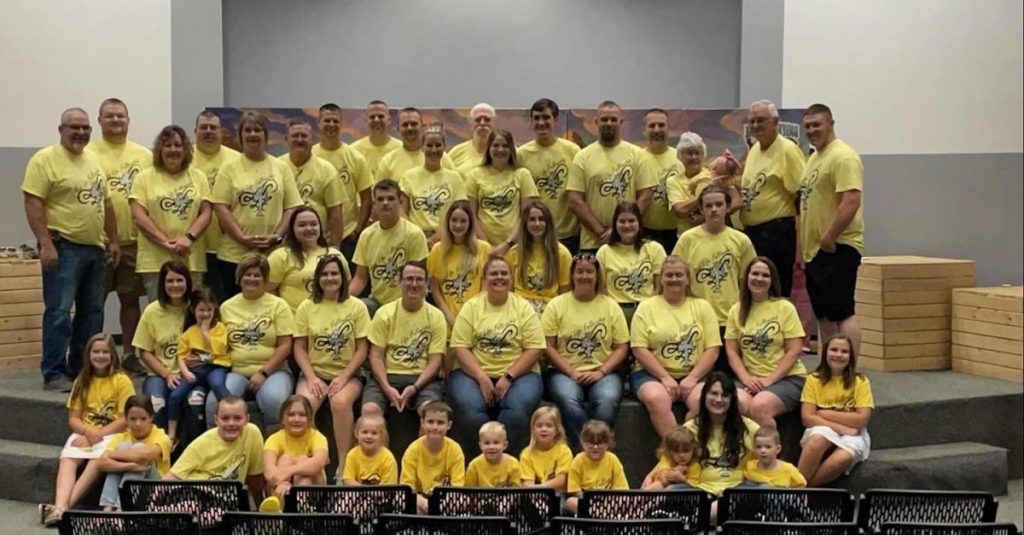 New Life Fellowship took 47 church members to Lake Charles, Louisiana on a mission trip to do some construction work and clean-up after a hurricane devastated the town.

Just after arriving and throughout the week, the team discovered they were there to restore hope to many while doing the construction work and clean-up.

The town of Lake Charles had been hit by four disasters in less than a year and many homeowners were beyond devastated.

The team arrived on Friday, June 25 after a 12-hour drive, to set up in the Sale Street Baptist Church youth center and prepare for the next five days. On Saturday, June 26, three crews got to work.

Project 1 was a home that had a bathroom with a floor that needed replaced and turned into a several day project of tear out. Project 2 was a clean-up job of downed trees and overgrowth that was knocked out in a few hours and gave the homeowner the ability to finally get a new home in the lot.

This homeowner had lost her home, all her belongings, and was living with friends.

The third crew was taking care of preparing the meals for the group, running supplies and child care.

On Sunday, June 27, all team members attended Sunday School and Worship with the Sale Street Baptist Church before heading out to Lake Charles to have three baptisms.

Katie and Savana Hurshman and Cade Wedgewood were baptized in the lake by Pastor Mike Wakeman while everyone else looked on, as well as many beach-goers.

On Monday, June 28, Project 1 continued on the bathroom floor, while Project 3 started more clean-up and brush removal for a man named Perry who was disabled.

It rained in downpours throughout the trip on top of already saturated ground, so part of that project couldn’t be completed with heavy equipment that was needed.

The crew finished up as best they could. The NLF crew split up and part went to the project 1 house and worked on planting flowers and cleaning up the yard from debris and overgrowth.

The flowers they planted and mulch they added was sitting there because the homeowner was disabled and just couldn’t get it done.

Seeing her flower beds in great shape made her overjoyed. The second part of the crew that split went to Project 4 for overgrowth and clean-up.

On Tuesday, June 29, Project 5 was started and completed in a short amount of time.

This crew was sent to assist a homeowner with floor tear-out but they also cleaned flower beds of debris and weeds.

They moved on to Project 6 and met Natalie, the homeowner, who had been living in her bedroom for several months because she believed the mold wasn’t as bad in there.

The crew started sheetrock tear-out, nail removal from what had already been mucked out, and removing the bathroom vanity.

Project 4 was mainly heavy equipment work so a small crew went back to that site and Project 1 continued to work on the bathroom floor, sheetrock and adding facia to the outside of the home, along with more yard work.

That project was the project that kept giving because they needed a tub, toilet and vanity as the week progressed.

The bathroom and extra bedroom received the first round of sheetrock, mud and tape so that Natalie could be moved into the clean, dry extra bedroom.

The damaged vanity was also replaced to allow her access to a bathroom that was clean and dry.

The ceiling sheetrock was torn out in her bedroom, dining room and kitchen, as well as the walls in the dining room, entry, laundry room, master bedroom and closet.

Mission members went on supply runs and sat in line for two hours waiting on sheetrock and other supplies, while members at the house continued to remove flooring and insulation.

At 10 p.m. on the last night, Natalie, her son Milton, her sister Linda and remaining members of the final team to finish the ceilings circled up for prayer in her kitchen.

It was asked that God provide more crews to come finish her home so that she can continue to rebuild her life after these disasters.

Each morning, the mission team started with an awesome breakfast prepared by the kitchen crews, devotions given by different team members, and finished almost every night with Worship, led by Nathan Hedglin, and devotion time.

Each night, team members went out on homeless ministry and prayer walks after devotion time.

In each situation and project, crews saw a restored hope to homeowners and initiative of them getting in on the work of clean-up and restoration with a new-found vigor.

Please continue to pray for these families as they attempt to rebuild.