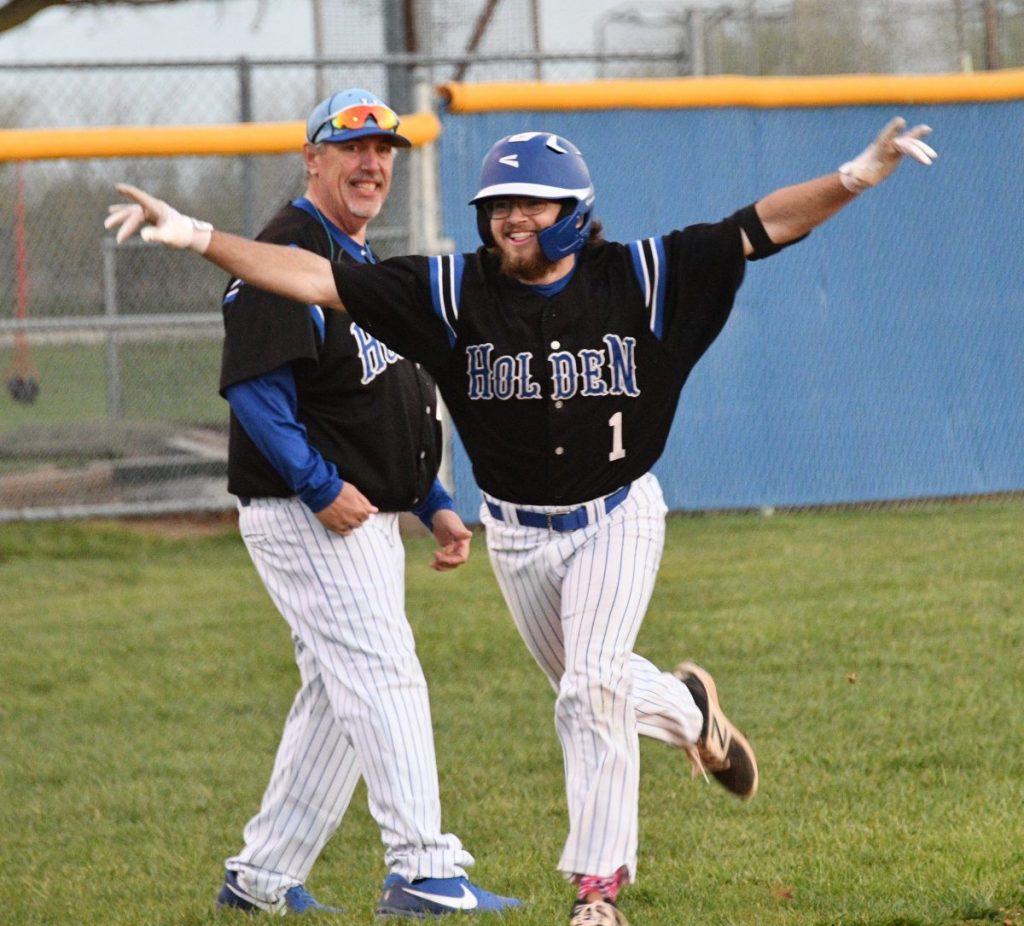 The Eagle Has Landed… Eagle centerfielder Andrew Catron rounds third base and heads for home plate after hitting a home run in the third inning of Holden’s game against Sherwood in the Holden State Farm Classic Tournament on Wednesday, April 14. Holden head coach Dave Riley enjoys the moment in the background. Catron duplicated his feat in the fifth inning by knocking a second home run as the Eagles defeated the Marksmen in a run-rule shortened 15-5 victory. Photo by Steve Edwards

In round robin play of the Holden State Farm Classic Baseball Tournament, the Holden baseball team surfaced with one win versus three losses last week.

Holden opened its tournament appearance with a loss to Knob Noster before rebounding with a win over Sherwood.

The Eagles fell to the baseball teams from El Dorado Springs and Odessa in Holden’s final two games of the five-team tournament.

Eagles Edged By Panthers In a freshman versus freshman match-up on the hill, Eagle starting pitcher Aiden Morarity took on Panther hurler Trey Payne on Tuesday Knob Noster emerged with a 3-2 win in the game.

“It was a couple of really good freshmen pitching against each other,” said Holden baseball coach Dave Riley. “We threw Aiden, and he was dominating on the mound. They matched each other inning-for-inning for a long time.

“Two outstanding ninth-grade pitchers dueled for what turned into a tightly contested game. Games with Knob Noster are always eventful, and this one lived up to that.”

Knob Noster did its offensive damage in the third inning by plating three runs in the bottom of the frame.

With two runners on, a bunt by Panther infielder Eric Bennett-Wade scored the first run of the game. Luke Bolton followed Bennett-Wade with another bunt that resulted in two runs following a throwing error by Holden on the play.

Zeroes marked the scoreboard for both teams in the fourth and fifth innings.

A strikeout by Panther relief pitcher Zayne Schroeder ended the inning with Holden’s fourth stranded runner of the game on base.

In the seventh inning, Wyatt Barron scored for the Eagles on a ground out by Holden second baseman Lane Richardson as Danny Hartzler advanced to second base.

“We stood and watched too many strikes go by, and we didn’t give ourselves a chance,” said coach Riley.

“We put the winning run on second in the last inning. “There were a couple other times in the game when we had runners on, and we didn’t move them. So we felt like we let that one get away. But also you have to give credit to them. Knob’s well-coached. They did a good job.

“We didn’t do the things we needed to do to give us a chance to win, and if you don’t do that for yourself in a close game against a good team, it makes it tough all the way around.” Coach Riley noted, “Three different innings we stranded runners on second and third when the inning ended. We took 10 called third-strikes, and it’s hard to be successful when you do that against a well-coached team.”

For Holden, Morarity pitched into the fourth inning.

He struck out 6 batters while allowing 3 hits, and walking 3 batters.

Garrett Smith pitched in relief of Morarity for the final 3 innings.

Smith recorded 3 strikeouts, allowing no runs. At the plate, Smith had 1 hit with an RBI, and 2 stolen bases.

Andrew Catron Blasts Two Home Runs Versus Sherwood In their second game of the Holden Tournament, the Eagles clinched a run-rule shortened 15-5 win over Sherwood.

Senior centerfielder Andrew Catron lit the fireworks to ignite the team to the convincing victory by belting two home runs as freshman pitcher Lane Richardson received his first call to start on the hill in his varsity career.

“We started slow. After last night, we were a little disturbed with ourselves,” said coach Riley in regard to Holden’s loss by one run to Knob Noster the night before. “We started a freshman. Lane had only thrown one inning prior to that. He went out there, and he threw well…did a good job.”

After Sherwood plated a run in the top of the first inning, Holden evened the score at 1-1 in the bottom of the second.

Catron sent his first home run over the fence in the third inning with no outs and two runs already scored in the inning.

Catron’s cannon shot scored Aiden Morarity who had hit an RBI single ahead of Catron.

Wyatt Barron scored on a ground out by Danny Hartzler for the Eagles’ fifth run of the third inning.

Catron knocked a solo home run in the fifth inning for his second round tripper of the game.

“Andrew’s a very athletic kid,” said coach Riley. “He had a hot start after the first three games, four games…he had a great start. He didn’t go cold or anything, but he kind of had a couple games where he wasn’t quiet as hot as he had been.

“Tonight…those balls were, the first one was a blast. “Those are two big hits, and for a guy to hit two in one game is pretty good for us. It’s good for any high school kid to hit two home runs in a game. It’s pretty cool.”

As the team juggled lineup assignments throughout the week of the tournament due to sickness, injuries, and pitching rotations, Eagle utility player Carson Gard got the call to start at second base in Richardson’s normal position when not pitching. 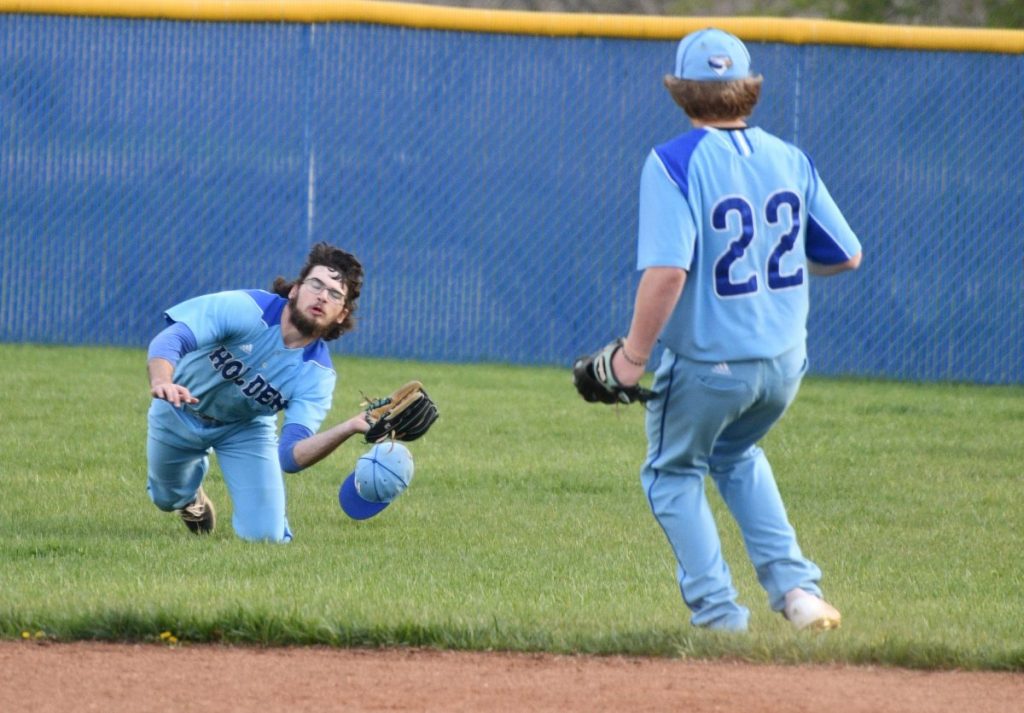 Low Flying Eagle… Holden centerfielder Andrew Catron makes a diving catch during the second inning of Holden’s game against Knob Noster in the Holden State Farm Classic Tournament. on Tuesday, April 13. Second baseman Lane Richardson (22) provides support on the play. The Eagles fell to the Panthers by the final score of 3-2. Photo by Steve Edwards

Richardson moved to his second base spot at the start of the fifth inning as Gard relieved the starting pitcher.

“He’s a baseball kid,” said coach Riley of Gard. “He got a couple big hits tonight, shot one to right field…. He got a big hit last night out of our two, and he closed out the game tonight. Now that he’s playing, he’s going to be an important piece for us.”

“Carson Gard relieved Richardson in the last inning, and had two strikeouts, and one walk. “Andrew Catron led our offense by going two-for-three with two home runs, and five RBIs. Lane Richardson was two-for-two with two walks, and one stolen base.

“Garrett Smith was two-for-two with a triple, two walks, and a stolen base. Aiden Morarity was two-for-four with a double. Carson Gard was one-for-three.” The head coach added, “This was a good bounce back game for us. We did a better job at the plate of making the pitcher earn his outs by putting the ball in play, and making the defense make plays. We played better defense tonight, too which is huge for us.”

Carson Gard tied the game at 1-1 in the bottom of the first inning on a ground out that scored Lane Richardson.

The game remained knotted at one run apiece through the fourth inning.

A bloop hit by the Bulldogs, and a two-run home run resulted in three runs for El Dorado Springs in the fifth inning. “It was 1-1 going into the fifth,” noted coach Riley. “They got one guy on, then they got the bloop that we didn’t get to over at first. The next guy hits the home run to give them that big lead.

“We had runners on every inning. We’re just not getting the key hit, and we’ve got to get the key hit,” highlighted coach Riley.

Garrett Smith started on the mound for Holden. Smith pitched six innings in which he recorded 5 strikeouts while allowing 5 runs (3 ER) on 8 hits, and 2 walks.

In one inning of relief, Gard allowed 4 walks, and 1 run.

Versus Odessa Holden and Odessa closed out the Holden State Farm Classic in wet field conditions amid sporadic rainfall with the Bulldogs taking a tournament championship clinching 7-0 win.

Eagle senior starting catcher Ryan Miller exited the game after the first inning with an injury to put Carson Gard in the gear behind the plate, and sophomore Justin Radunsky at shortstop as Holden juggled its lineup for the fourth night in a row.

Danny Hartzler pitched in relief for the final 2 innings. Hartzler struck out 1 batter while allowing 5 hits, and 2 walks. “Ryan gets hurt, and has to come out,” described coach Riley. “We put Carson back there, and Carson hasn’t caught in a while. He did okay. Aiden was throwing very well. He was throwing good. “It’s just too bad we can’t back up these guys with some runs. We’re going to have to do something offensively.

“Justin came in. He’s a middle infielder. He’s that next guy in line behind a couple of those guys. He’s biding his time, and waiting his turn. He does a good job defensively. When Justin gets out there, we feel fine defensively, and he’s going to have more chances.”

At the end of last week, the Holden baseball team held an overall record of 5-4, and stood at 2-1 in MRVC-East play.

The next game scheduled for the Eagles is this Thursday, April 22.

Holden travels to Knob Noster on Thursday for a 4:30 p.m. varsity contest that will be followed by a JV game.