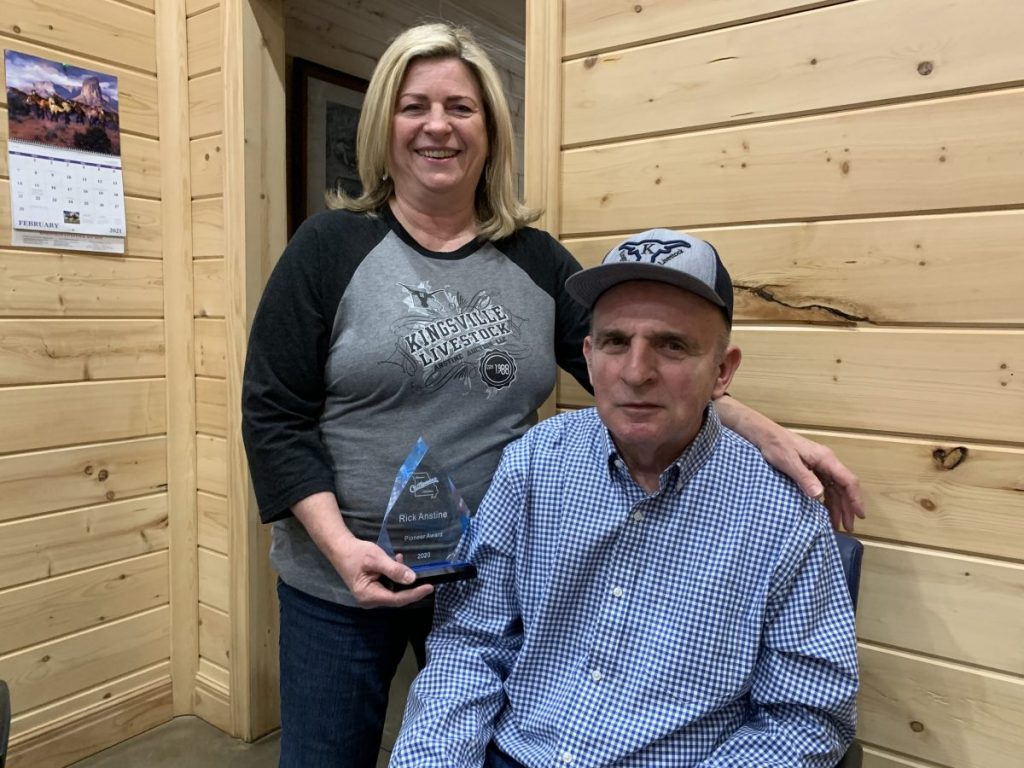 Sale Barn Success… Pictured are Rick and Marcia Anstine of Kingsville Livestock Auction with the prestigious Pioneer Award Rick won on January 9. The award was presented by the Missouri Cattlemen’s Association for the lifetime of livestock achievements Rick has accomplished. The Anstines purchased Kingsville Livestock Auction in 1988 and it has grown over the years to a fine livestock establishment that draws buyers from 10 different states. Rick and Marcia credit their loyal employees, customers and dedicated family members with the success of the sale barn. Photo by John Roberts

On January 9, Rick was presented the Pioneer Award at the 53rd Annual Missouri Cattle Industry Convention, held at the Lake of the Ozarks.

Rick and his wife Marcia and their family own and operate the Kingsville Livestock Auction Barn.

Rick has been honored with several awards throughout his illustrious career which spans 45 years, including the Missouri State Champion Auctioneer in 1985, and the Allied Industrial Award he won some years earlier.

Rick and his family have long been interested in auctioneering and have grown up around it. He was just a young boy when he knew he wanted to pursue his dream of becoming an auctioneer.

He grew up on a dairy farm north of Blairstown and attended school in Blairstown for five years. His mother still lives on the old home place where he was raised.

He then went to school at Chilhowee and graduated from Chilhowee High School in 1976.

Rick fondly recalls going to dairy sales with his father when he was growing up and he became fascinated with the auctioneers at the sales “singing” the magical cadence as they sold the cattle.

He was just 10 years old when he knew that’s the career path he wanted to follow. When he graduated high school, his dad asked if he wanted to continue his education at college.

He replied he wanted to go to auctioneer school, so that’s just what he did. He attended auctioneering school in Fort Smith, Arkansas.

Rick and Marcia met in grade school and then went to different high schools. When Marcia graduated in 1977, the couple married.

Marcia also attended auctioneering school with Rick. So, this love of auctioneering goes back well over 40 years with the couple.

The Anstines purchased the sale barn in 1988 and the whole operation has continued to grow by leaps and bounds once they took the reins.

Rick and Marcia truly run a family business, as their children are very involved in the day-to-day operation of Kingsville Livestock Auction.

Jeremy’s daughter, Alexa works in the offices at the sale barn. Allie Anstine helps pen and bring cattle up to be sold on horseback.

Tucker Anstine rides horses in back to bring in cattle to sell. Jeremy’s wife Dawn, as well as Marcia, both work in the offices.

They also have a daughter, Melanie Bosch, who lives with her husband and son, Seth and Brody in Independence.

In 2020, they ran and sold 120,000 head of cattle. The couple credits the mammoth growth of the sale barn to a lot of hard work, loyal employees, invested family members, and sacrifice.

Along with the hard work of the employees and family members, technology has made a big difference in running the business and has also contributed to its success.

Rick explains, they now have traceability for all livestock. Also, the offices at the sale barn went from doing everything by hand to the use of computers that figure invoices for buyers and sellers.

Online bidding is also a popular tool used by the Anstines. Smart phones are used to send invoices to buyers. The night before an auction they send faxes and emails listing available cattle that will be for sale the next day.

Rick has been in the business for 45 years and has seen about everything the cattle and livestock business has to offer.

He reiterates the success of the sale barn comes from hard work, honesty, loyal customers and dedicated employees.

When asked what the Pioneer Award means to him, he said, “It is gratifying and I am honored and humbled to be recognized as a Pioneer Award recipient.”

Rick and Marcia also have a commercial cow herd and backgrounding lot at their home farm, south of Holden.

Rick added, there have been a lot of changes at the sale barn and he says there will be more.

“As long as there are cattle to sell there will be an auction at Kingsville Livestock,” he said. “We will have to be flexible to change with the times.”

Kingsville Livestock Auction currently boasts 25 full-time and part-time employees, up from the 12 they started with in the ‘80s.

Rick and Marcia are grateful for the success of their business, and for the prestigious award.

“We would like to thank everyone who helped make this all possible,” the couple said. “To our loyal employees, family and customers, and other area businesses, we want to say thank you!

“We could not have done this without you. Last, but certainly not least, we want to thank God for giving us this opportunity!”