A group of hard-working, civic-minded women have been a staple in this community for 52 years.

A chapter of Beta Sigma Phi Sorority (a world-wide organization), Gamma Eta Master has proudly and lovingly served the people in this community for more than five decades. 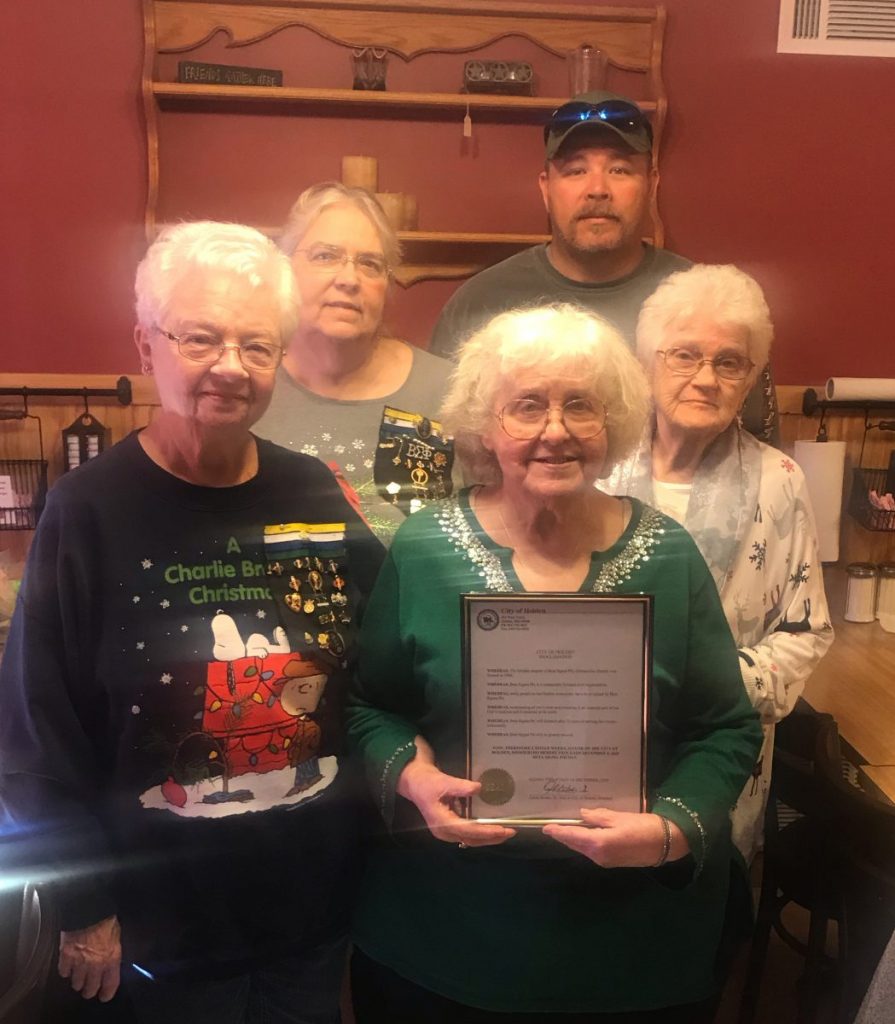 Sorority Receives Proclamation… Sorority sisters of Gamma Eta Master were awarded a proclamation for their years of dedicated service to this community. The sorority is disbanding after 52 years and they held their final meeting on December 4 at Jamie’s Place. Mayor Doyle Weeks attended the meeting and awarded the proclamation which stated December 4 will hereafter be known as “Gamma Eta Master Day.” Pictured, left to right, Judy Kephart, Debbie Taylor, Nancy Moore, Linda Watson, and back row, Mayor Doyle Weeks.

Sadly, the group of sisters gathered for their final meeting in December of 2020.

The years have taken their toll on the sorority, as they have lost several members.

The members all have a number of years of service in sorority.

Judy has been in for 52 years; Nancy for 35; Linda, 35; Debbie, 20; and Janet, 11-and-a-half years. Loyal members who were active in the sorority until their deaths were Nancy Roberson, Carolyn Brillhart, Helen Shore and Mary Williams.

They and their unselfish contributions will be forever missed and remembered in this community.

The sorority has a long, rich history in Holden and the sisterhood has graciously given and proudly served the people of this community with love for many years.

This chapter of Beta Sigma Phi was organized in November of 1968, and one original founding member, Judy Kephart, has remained active throughout the past 52 years.

In 1968, they began as Kappa Nu Sorority and boasted 12 founding members.

A lot of the members’ husbands also served as Jaycees, so between the two civic organizations, a lot of help was given to the people of this community.

The group was Kappa Nu from 1968 through 1979 and then they moved up a step and became Xi Theta Omicron.

In May of 1994, Xi Theta Omicron members progressed to the Preceptor Level of Beta Sigma Phi. Their new name was Preceptor Zeta Omega.

After some years, they became Laureate Delta Upsilon and finally graduated to Gamma Eta Master, the highest rank they can attain.

In the Beta Sigma Phi constitution, it says the purpose of the organization is to unite in fellowship and friendship those women accepted for membership, to promote the cultural development of members, and to foster association with each other in the pursuit of the liberal arts.

That is why they are known around the world as “The Friendship Organization.”

Beta Sigma Phi International (ΒΣΦ) is a non-academic sorority with members in chapters all around the world.

It was founded in Abilene, Kansas, in 1931 by Walter W. Ross “for the social, cultural and civic enrichment of its members.”

The organization is now present throughout the United States and in 30 other countries.

The Greek letter name is derived from the sorority’s motto – the letters, “Beta,” “Sigma” and “Phi” were the first letters of the Greek words for “Life, Learning and Friendship.”

The organization initiated its millionth member in 1995 in California.

The members of Beta Sigma Phi raise more than $3 million for local charities and donate more than 200,000 volunteer hours in an average year.

In 1931, during the Great Depression, there was a need for an organization that could bring women together and expose them to a social, cultural and educational climate that was not available in those difficult times.

Most importantly, there was a need for friendship and support from other women.

Beta Sigma Phi was created out of this need.

It did not take long before Beta Sigma Phi sisters were helping others.

Members worked together to raise $22 million in war bonds during World War II.

The 1950s brought peace and prosperity to the world, and Beta Sigma Phi membership doubled.

This era was filled with grand balls, elegant teas and the growing strength of sisterhood as thousands of women joined Beta Sigma Phi.

As the times have changed, so has Beta Sigma Phi. 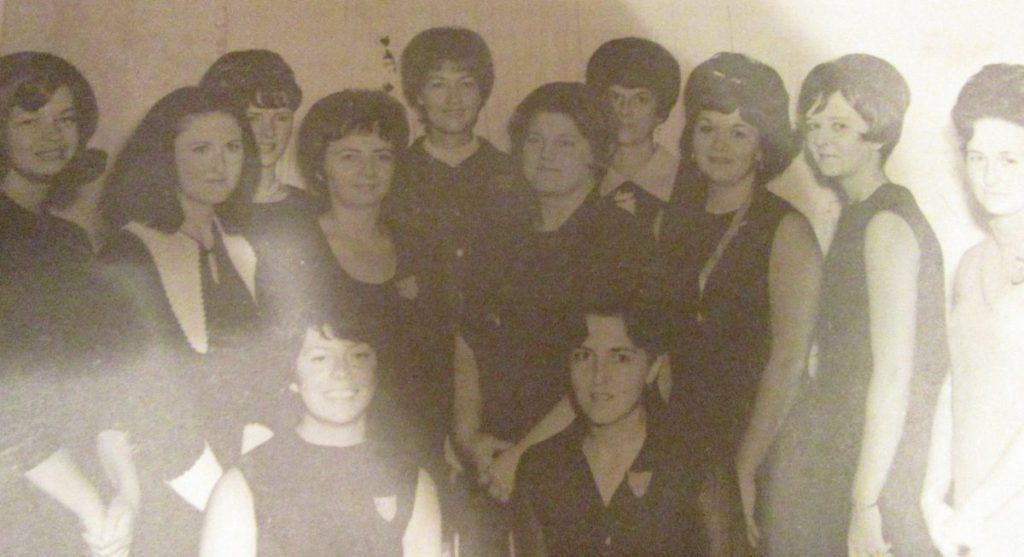 Gamma Eta Master sisters, both present and past, have given much to this community by supporting local charities, such as the Holden Food Pantry, the Holden Area Ministerial Association, the Christmas Store, Bright Futures Holden, the Senior Center, Adopt-a-Family at Christmas, and many others.

The sorority sponsored the local Christmas and Easter Bazaars for decades as a way to bring crafters and the public together, and to raise funds for their worthwhile projects.

One of their many community programs was the Woman of the Year award they would give to a deserving individual.

Woman of the Year awards honored women who worked and volunteered their time to make the Holden community a better place to live.

The sisters have held numerous fundraisers over the years, so they have money in their budget to help as many people as possible.

For two years back in the ‘80s, they put on Holden’s first-ever Haunted Houses, which were a big hit with the community and a lot of fun to do, according to members.

The group also had a food booth at the annual Holden Street Fair for many years.

They were famous for their taco salads and homemade pies.

The bulk of the money they raised was used for a worthwhile project, to aid families in need, or for community charities.

Some funds were used for the sisters to attend the annual Beta Sigma Phi conventions, where a lot of good memories were made with other Missouri sororities.

One of their yearly community functions was to help organize the queen shows at the Fair each year.

In 1991, the project had a close to home connection for the group.

Member Nancy Moore has a granddaughter named Tessie and she was born April 21, 1990.

Two months after her birth she was diagnosed with a cancerous brain tumor.

The local sorority and all the chapters in Missouri adopted Tessie as their service project that year.

Tessie’s parents’ insurance would not pay all of her medical expenses because it was a pre-existing condition.

The sorority’s fundraisers that year were all for Tessie.

Nancy reminisces back on that time with bittersweet memories. “Tessie is now 30 years old and living a good life,” said Nancy. “Thank you for letting us watch her grow up and for being there for her parents. “It was their hour of need and Gamma Eta Master, you will be in my heart forever!”

Nancy has 35 years in the sorority. “We could always depend on the girls of Gamma Eta Master,” she added. “This has been a wonderful club to be a part of. I will always cherish being a Gamma Eta Master sister and I will never forget you – Judy, Linda, Debbie and Janet, and all of our sisters in past years!”

Other members shared their memories and commented on their cherished years as a sorority sister.

The senior member who has been active for the last 52 years is Judy Kephart. She was a founding member from the Kappa Nu group of 1968. Judy shared her memories, saying, “I have always enjoyed the friendships made in sorority and especially liked the fact that we were mainly a service organization, helping those in need in the community.

“In the beginning, a lot of our husbands were Jaycees, so we all worked together for the benefit of the community. “We aren’t just sorority sisters, we’re good friends. We rely on each other to help us through the difficult times in life. When my husband died, I was thankful to be part of such a caring organization.”

Linda looks back on some of the projects the group participated in with fondness. “I remember working in the Royals and Chiefs stadium in the concession stands to raise money,” she said. “It was a lot of hard work but we had fun doing it.

“I also enjoyed the Beta Sigma Phi Conventions. It has been 35 years of fun and work! “I’ll miss all the fun times we shared together with my sorority sisters now and especially the ones who are gone.”

Debbie, who has been a member for 20 years, says, “We all had good times. We spent a lot of holidays having gatherings with our husbands joining us on Valentine’s Day, Halloween, Christmas and Thanksgiving. “We shared lots of laughter and just being together was a blessing. I will miss all my sorority sisters, but they will always be just a phone call away.”

Janet has been in for more than 11 years and she shared, “What I’ve enjoyed most is the friendships, fun times together, supporting one another, and helping the community.

“As a team, we worked hard on the bazaars (two per year), selling carnival tickets for the annual Street Fair, organizing the queen contests, and other activities. “We always had a good time doing them and shared the load.

As a group, the five remaining sorority sisters have spent a combined 153 years serving this community and we will all miss their selfless contributions. 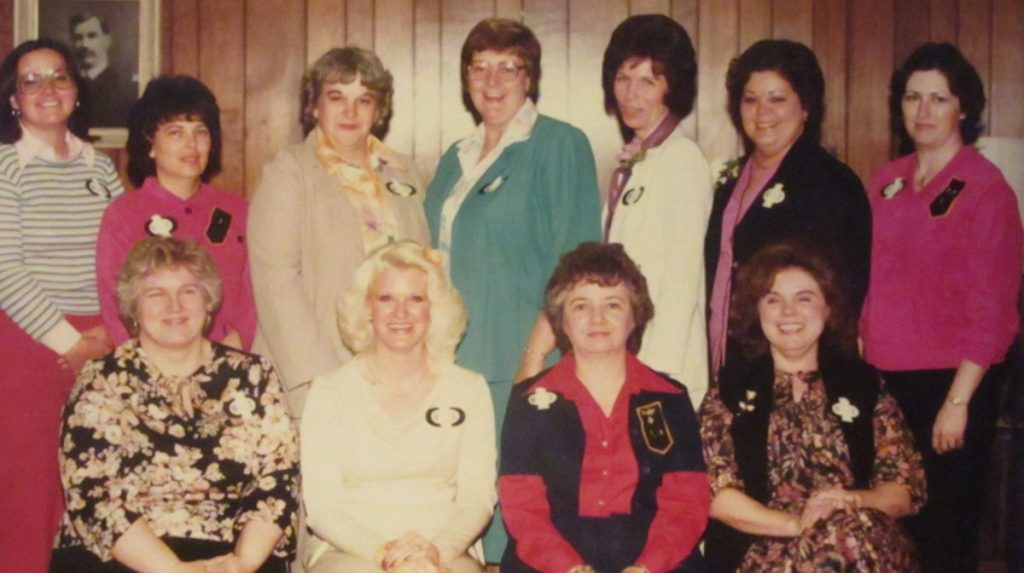 Many members have come and gone during the last 52 years, and all have left their unique mark on the residents of this community by their selfless, giving actions.

The sisters of Gamma Eta Master met for their final bittersweet Christmas meeting on December 4 at Jamie’s Place.

Because of their loving service, personal commitment, and lifelong loyalty to this community, Mayor Doyle Weeks attended the meeting and presented the sorority with a proclamation from the City of Holden.

The proclamation hereby announces that December 4 will forever be known as Gamma Eta Master Day in Holden.

It proclaims: “Whereas, the sorority is a community-focused civic organization; Whereas, volunteering of one’s time and resources is an essential part of our city’s tradition; and, Whereas, Gamma Eta Master will be greatly missed.”

One of the sorority’s pledges encompasses their values and mission in their sisterhood, and says: “Sisters in Beta Sigma Phi, we pledge ourselves anew to the aims and purposes of our glorious sisterhood; more tolerance for our fellow beings through a better understanding of them; a clearer and deeper appreciation of the cultural and finer things in life for ourselves; and a determination to give the best that is in us to our sorority and to assist in any and every way to shed the light of our torch throughout the world.”

Over the last 52 years, many lifelong friendships have been forged and enjoyed, and wonderful memories are shared that will be cherished forever.

This community owes a debt of gratitude to the sisters of Gamma Eta Master, both present and past, for their support and sincere love for the people of this town.

Although the sorority is no longer together, the selfless work that they have done in our community for decades will live on forever in our hearts.

Congratulations on a job well done, good and faithful servants – you will be forever missed and loved!