MoDOT crews started the final phase of roadway and sidewalk construction shortly after the first of the year, as one block of 2nd St. is now closed for the ongoing project.

Crews are currently working on 2nd St. from Pine to Main St., and are on schedule to finish the entire three-block downtown area by May.

Temporary detours and entrances to downtown businesses will be in place. Continue to follow the Image for updates.

The first part of the final phase begins with storm sewer work, then moves to new ADA-compliant sidewalks, ditches, parking areas, and finally, paving of roadways.

Currently, the contractor is installing the storm sewer between Pine St. (South 58) and Main St., according to MoDOT Area Engineer, Rich Shipley. 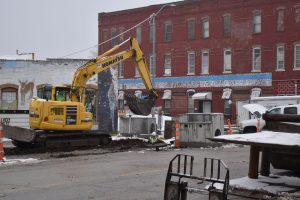 2nd St. Closed For Construction… Work crews shut down part of 2nd St. after the first of the year to begin the downtown construction. New sewer systems are the first order of business for crews, then they will start tearing out the old sidewalks and replacing them with new ADA-compliant sidewalks. The multi-million dollar MoDOT project includes new roadways, sidewalks, curbs, ditches, infrastructure, and handicap parking in the downtown area. The overall project runs from 2nd St. downtown to 9th St. on both S. Olive and Pine Streets. Photo by Steve Edwards

The storm sewer is set to be completed by the end of January.

As that work is underway, crews will begin removing the old sidewalks and installing the new ADA-compliant sidewalks to make the entire downtown area handicap accessible.

The downtown sidewalks will be completed one block at a time (Pine to Main St., Main to Market St., and Market to Rt. 131 (Olive St.).

This work will naturally interfere with entrances to downtown businesses.

Plans are in the works so the least amount of disruption is caused by the construction.

“Of course, the contracting crews have and will continue to coordinate with each building owner,” added Shipley.

Once the new sidewalks have been completed, crews will pave the historic business district, which, as of right now, looks like it will be in April.

The original project completion date was slated for the November/December 2020 timeframe.

However, due to utility conflicts, that has been extended to May 1 of 2021.

This date is subject to negotiation with the contractor if further conflicts arise and cause additional delays.

The roadway and sidewalk project encompasses all of the downtown business district, as well as S. Olive and Pine Streets, in a nine-block radius.

Although there have been some inconveniences throughout the project, it will be more than worth the minor headaches when it’s all finished.