The Higginsville football team (5-1, 2-0) played the role of spoiler in Holden’s Homecoming and Senior Night game last Friday as the Huskers reaped a 44-0 win over the Eagles (0-4, 0-2).

Senior Eagle football players Daniel Taylor and Andrew Catron, and team manager Sam VanHooser were introduced in a Senior Night ceremony before the game along with the senior members on the cheer squad, band, and color guard.

“We moved the football really well against in my opinion, the best defense we’ve seen all year, outside of Boonville, maybe.

“We did not score which is unfortunate, but we moved the ball. Last week, we had three first downs. We had several first downs tonight.

We moved the ball, we did good things,” said coach Tucker in looking for silver linings to the game.

Freshman Reco Jenkins got the call to start at running back on the night in place of Catron.

“Again, we started three freshmen tonight on offense against a really good football team,” noted coach Tucker. “I thought Reco played really well, aside from the one fumble. I’m really proud of him.” 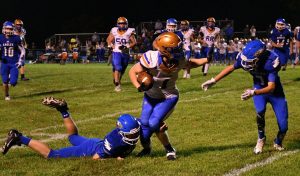 Taylor led the Eagles in receiving on the night with 49 total yards on 3 receptions.

“Daniel had some good catches,” said coach Tucker of the senior receiver. “I thought Jarrin Brown played really well. Unfortunately, tonight we just had some drops at bad times.”

Brown finished the game with 31 receiving yards on 4 catches.

“Defensively, we got a stop in the second half after a muffed punt,” highlighted coach Tucker. “I thought that was really positive. I thought we did some pretty positive things.”

A tackle for a loss by Eagle linebacker Tyler Hankins on a third-and-three play for the Huskers deep in Holden territory forced the Husker punt cited by coach Tucker.

Hankins ended the night with 7 total tackles to match Taylor’s 7 tackles as they led the team in takedowns.

“Again, we’re just pretty outmatched right now, but I’m really happy with our kids,” concluded coach Tucker. “I think we did a lot of really great things tonight. We came out pretty healthy again, too, so that’s another positive. We did a lot of good things. We’re just going to have to be happy with that for right now.”

This Friday, the Eagles travel to Richmond (4-1) for a 7 p.m. conference game.

“They look really good,” said coach Tucker in regard to the Spartans. “They just beat Higginsville by 20.

“Their quarterback is really good. They were in the same boat we are…a couple of years ago, they took a licking, and now they’re giving them back. They won eight games last year, and they returned almost everybody.”