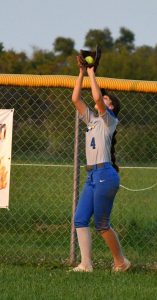 Lady Eagles Grab Third Conference Win…Lady Eagle centerfielder Marah Klover makes a grab in the outfield during Holden’s game against Richmond on Thursday, September 24. The Lady Eagles knocked off the Lady Spartans by the final score of 12-5 to give the Holden softball team its third MRVC-East win in as many tries.                               Photo by Steve Edwards

In a closely contested game through four innings, the Lady Eagles softball team exploded for seven runs in the fifth frame to boost them to a 12-5 win over visiting Richmond last Thursday. A two-run home run by Liz Stout in the sixth inning that scored Camille Davidson closed out scoring on the night as pitcher Maddie Sechrest took the complete game win on the mound.

“We started off the game a lot slower than normal as far as offense,” said Holden softball head coach Jeff Smith. “Defense was good. Offensively, we struggled early.”

Richmond took a 1-0 lead in the top of the first inning while holding Holden to just a single by Davidson and no runs in
the bottom of the inning.

Sechrest kept the Lady Spartans in check and off the scoreboard in the second inning.

“We hit it hard right at people, and we hit some slow ground balls for some outs,” noted coach Smith of the Lady Eagles’ early struggles.

“Marah came up with a big three-RBI hit that got us to 3-3. That was big because we were down. “Then finally we got the bats going in the fifth.”

Holden’s seven-run fifth inning was sparked by Spring who led off with a single. She moved to second base on a steal. Spring scored on a hit by Camille Davidson that was mishandled by Richmond in the field.

Following Davidson’s at-bat, Stout put a pitch into a low orbit over the outfield fence for a two- RBI home run that plated Davidson in front of her.

McHenry kept the line moving with a single to put two runners on. Klover plated Wamsley and McHenry on a double to put Holden ahead 9-4.

A single by Spring scored Klover before Spring was thrown out attempting to advance to second base.

Richmond added a lone late run in the seventh inning to close out scoring in the conference contest that moved the Lady Eagles’ MRVC-East mark to 3-0.

“Liz had two home runs,” highlighted coach Smith. “Jocelyn had a couple big hits. Marah came up big again later in the game with a ball to right-center that scored two more RBIs.

“Kierstin Redhair, she had three hits on the night. She didn’t have any RBIs, but she scored two runs. She had a pretty good game.”

A tough over the shoulder catch by Redhair at second base accounted for the final out of the game.

“It was a little sketchy early, but we finished it out,” concluded coach Smith.

Klover ended the game with 5 RBIs on 2 doubles. Stout totaled 4 RBIs on her 2 home runs. Spring
had 2 hits,1 RBI, and 1 stolen base. Wamsley had 1 RBI on 1 hit. McHenry and Redhair each had 3 hits. Davidson
record 2 hits. With 1 hit apiece were Luxy Pearce and Faith Brown. Sechrest pitched a complete game, 6-inning performance for the win. She allowed 5 runs (3 earned) on 8 hits, and 3 walks while striking out 1 batter.