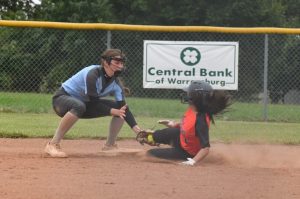 Panther Putout… Lady Eagle shortstop Camille Davidson lays down a tag on Knob Noster base runner Kaitlyn Everts during the third inning of Holden’s game against the Lady Panthers last Tuesday. Catcher Faith Brown provided the throw from behind the plate for the putout. The Lady Eagles took an 11-8 win in the game to start the MRVC-East season with a win.                                     Photo by Steve Edwards

In this fall sports season of unknowns due to the corona virus, wins and losses take on a more dramatic stance.

The Holden softball team eased some of the early-season tension by picking up its first MRVC-East win of the season in a 11-8 victory over visiting Knob Noster last Tuesday.

The Lady Eagles never trailed for the remainder of the game, fighting off several threats from the Lady Panthers as the visitors tried to claw their way back into the contest.

“It feels good to get the win,” said Holden softball head coach Jeff Smith after the game.

Holden’s first of 12 hits in the game came on a leadoff double by Marah Klover in the bottom of the first inning. Klover scored on a single hit by Kimmie Spring for Holden’s first run of the game.

Camille Davidson scored Spring on a single for an early 2-0 lead. Davidson advanced to third base on a sacrifice fly ball by Liz Stout.

Davidson would cross the plate for Holden’s third run of the first inning on a ground out by freshman Faith Brown.

The Lady Panthers answered with two runs in the top of the second inning.

During the second inning, Sechrest left the game with two outs after being struck by a line drive back to the pitcher’s mound.

She was relieved by Spring who finished the game on the hill.

“She was effective, and then they got pretty confident against Kimmie.

I’ll give them hard hits, but we had four or five dropped fly balls that shouldn’t be dropped that cost us probably four or five runs.”

Sechrest’s unfortunate early exit from the mound led to a wholesale position swap on the field with Davidson moving from the catcher spot to shortstop, right fielder Brown strapping on the catcher’s gear, and Tasia Lee entering the game at right field.

Brown aided the Lady Eagles defensive cause from behind the plate by gunning down Lady Panther outfielder Kaitlyn Everts on a steal attempt in the top of the third inning.

Davidson handled Brown’s throw down to second base on the out. 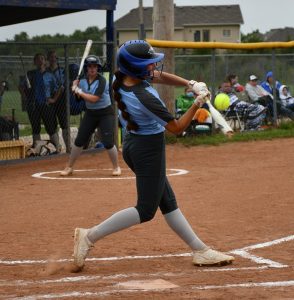 Leading Things Off… Lady Eagle center fielder Marah Klover led off the bottom of the first inning with a double in Holden’s conference game against Knob Noster last Tuesday. Klover finished the game with three hits, an RBI, three runs scored, and a stolen base. The Lady Eagles defeated the Lady Panthers by the final score of 11-8.                             Photo by Steve Edwards

Brown extended Holden’s lead to 7-2 with a leadoff home run in the bottom of the third.

Knob Noster would threaten by loading the bases in the fourth inning.

A ground out ended the Lady Panther threat as the Lady Eagles also put up a zero in the fourth. Everts led off the fifth inning with a single, and a dropped pop-up by Holden put two runners on.

Everts would score on a ground ball by Emma Frisbee.

Stout’s shot over the fence scored Davidson who had doubled to lead off the inning.

Brown’s second round tripper of the game was a solo shot that put Holden ahead 10-5. The Lady Eagles added one run in the bottom of the sixth inning on a sacrifice fly ball by Spring.

Knob Noster managed three runs in the top of the seventh inning in a last ditch comeback effort to set the final score at 11-8. Klover ended the game with 2 doubles, and 3 total hits.

She scored 3 runs, and had 1 RBI. “Marah definitely solidified herself towards the top of the lineup today,” highlighted coach Smith. “She hammered the ball.”

Brown finished the game with 2 home runs for 2 hits, 3 RBIs, and 2 runs scored.

“Faith is a freshman coming in there, third game on varsity ever, and takes two opposite field home runs,” highlighted coach Smith.

“She’s got a very bright future. Also she is multi-positional. “We put her behind the plate.

We put her in right field. She gunned out the first girl who tried to steal on her. Nobody else tried after that. I’m confident in her. She’s young defensively, but she’s solid behind the plate.”

Stout totaled 2 hits (1 HR), 2 RBIs, and scored a run. “Liz got her second home run of the season, so that’s good to see,” said coach Smith.

“She’s got great hands over there at third. She got her hands on a couple that most people probably wouldn’t have even got their hands on.

She made some really good plays.” Spring finished the game with 1 hit, 2 RBIs, and 1 run scored.

On the mound, Sechrest worked 1 2/3 innings in which she struck out 3 batters, walked none, and allowed 2 runs on just 1 hit.

Spring finished out the final 5 1/3 innings. She allowed 6 runs on 12 hits, and 2 walks. Coach’s Corner “Defensively on the ground we looked great; defensively, in the air, not so great,” summarized coach Smith after the conference-opening win over Knob Noster.

“It was nice to see some things that we need to work on.” 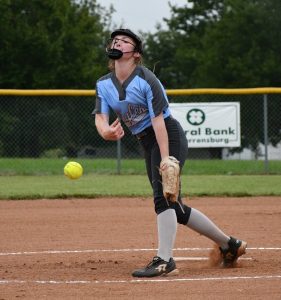 Opening Statement… Lady Eagle starting pitcher Maddie Sechrest recorded three strikeouts for a one-two-three scoreless first inning in Holden’s home conference game against Knob Noster last Tuesday. With two outs in the second inning, Sechrest left the game after being a being struck on the leg by a line drive hit back to the mound. Relief pitcher Kimmie Spring finished the contest on the hill as the Lady Eagles went on to win the conference opener 11-8. Photo by Steve Edwards

The win over Knob Noster moved the Lady Eagles’ season record to 2-1, and their MRVC-East mark to 1-0 on a day when overcast skies threatened with potential rain showers all afternoon.

“It was nice to get a game in when we weren’t expecting to get a game in today, and to see what we need to work on,” said coach Smith after completing the game on an unseasonably cool evening, but with a dry field after rains held off on the day.

“Offensively, it was fantastic, and getting to see all the young talent really stepping up big,” concluded coach Smith.

Fall Sports Season Note The Holden softball team’s advance on the conference season was halted two days after the win over Knob Noster with the cancellation of Holden’s MRVC-East contest against Lexington on September 10.

With positive Covid-19 cases accounted for among a few Holden high school students, the school district suspended all of the fall sports seasons, and other extracurricular activities for two weeks in an attempt to curb the spread of the virus at school.

An announcement made by the Holden R-3 School District on September 10 read as follows.

“We have made the difficult decision to cease all high school activities and athletics until Monday, September 21, to help stop the spread of Covid-19.”

When contacted on the issue, Holden Activities Director Spencer Gudde stated, “We will resume practices on September 21, and competitions on the 22nd.

With Covid, everything is up in the air, but I will keep the calendar updated.”