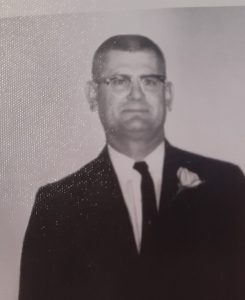 Heroic And Selfless Actions Saved Lives… Pictured is Forrest McKeown, a hometown hero who tragically lost his life trying to save others the fateful night of the Blackwater Creek flood in July of 1965. Also lost in the flood were rescuer Bill Callaway and youngster Mike Henley. This year marks the 55th somber anniversary of the tragic night in Holden. Photo submitted by Patty Raker

July of 2020 marked the somber 55th anniversary of a horrific local tragedy that claimed the lives of three Holden residents.

Forrest McKeown and Bill Callaway, both of Holden, showed true heroic actions as they were lost in the churning waters of Blackwater Creek trying to save a woman and four children. Ten-year-old Mike Henley was also claimed by the swirling flood waters that stormy night.

The tragedy unfolded on the dark, rainy night of July 19, 1965, when a vehicle driven by Mrs. James T. Henley was returning from a 4-H skating party in Warrensburg.

This area of Johnson County had received a deluge of rainfall, totaling 13 inches in some areas, in a matter of a few hours. Blackwater Creek was known for the flash flooding that occurred in the low-lying farmland and on nearby roads and highways.

As the group in Mrs. Henley’s car attempted to make their way home, Mrs. Henley noticed that 131 Highway was underwater as it had continued to rain all night while the group was in Warrensburg.

To avoid the flooded 131 Highway, Mrs. Henley attempted to take a country road to their home. Although this road was partially covered with water, she attempted to make her way toward home and safety.

Shortly after entering the water, the Henley car stalled. It was only a matter of minutes until water engulfed the automobile. The car’s occupants were panic-stricken and when the car began to sink, they must have experienced a terror they had never known before.

Mrs. Henley managed to get the four youngsters and herself to the top of the car. Fortunately, she maintained the presence of mind to honk the horn of the car in an effort to call for help. She left the car lights on, hoping someone would see the light in the darkness.

She and the children began to scream for help into the dark night, unsure if their efforts would be in vain. The heavy rain continued undeterred, making a loud clamor. The downpour, coupled with the roar of the swollen creek, provided a cacophony of noise that did not bode well for the stranded flood victims.

For the next hour-and-a-half, from 10:30 p.m. until midnight, the honking of the horn and the screams for help continued almost without interruption but with precious little encouragement that they would ultimately be heard.

Young David Dodson’s grandparents,  Mr. and Mrs. Billingsley, were the first to find the car submerged in the floodwaters. They had become concerned when their grandson didn’t return home and they set out to look for them, thinking the group may have experienced car trouble.

The Billingsleys immediately rushed to the Deweyville Store, where they called the Holden Fire Department for help. At nearly the same time the fire department was called, help was coming from another direction.

The William Callaway family lived on the north side of Blackwater Creek and they heard the screams of  Mrs. Henley and the four boys.

The Callaways immediately headed for Blackwater Creek. South of Deweyville, they were met by Lester Long who told them a woman and four children were standing on top of a car enveloped by the water of Blackwater Creek and a boat was needed for a rescue attempt.

Bill Callaway immediately turned his car around and went back home to get his boat. When he returned to Blackwater he found the fire department had arrived at the high water point.

Bill managed to put his 14-foot aluminum fishing boat into the dark, churning waters with the help of several others on the scene.

Charles Edwards, one of the firemen present, volunteered to make the trip with Bill in the boat to the stranded, submerged car. Callaway and Edwards successfully reached the car upstream.

Determination was etched on the faces of Callaway and Edwards as they were sure they could get the job done.

It seemed the rescuers had reached the car just in the nick of time as the swirling waters were within two or three inches of the top of the car where the terrified party clung for dear life.

A sigh of relief no doubt was breathed by everyone as the five were safely loaded into Bill’s boat. Unfortunately, the relief was short-lived as the boat was hit by something churning in the murky water, causing it to swing around violently and strike the car, which disabled the motor.

Things went from bad to worse when the boat capsized and all were thrown into the merciless churning creek waters.

Bill managed to hold onto Mrs. Henley and three of the boys – David Dodson, Steven Zvacek and Mike Henley.

Charles Edwards and Frankie Henley became separated and drifted away from the others. After clinging to branches of a tree, Charles and Frankie climbed another tree to safety where they spent the rest of the long night. They were picked up by boat the next morning at about 5 a.m.

Bill held the other people up in the water by a tree for approximately three hours against a current so rapid that it took all the strength he could muster to keep from being swept away. Just one second’s relaxation meant certain death for those depending on him and for himself.

Finally, about 3 a.m., members of the Holden Fire Department fastened together sections of fire hose and added sections of rope which were tied to the structure of the bridge, to form a lifeline.

Bill yelled to the firemen that he could not hold on much longer.

City of Holden nightwatchman Bill Meyer swam out, and with help from the lifeline, made repeated trips to take Mrs. Henley, David Dodson and Steve Zvacek to safety. Meyer himself suffered from such great exhaustion he was unable to return for Bill Callaway and Mike Henley.

No one else at the scene was strong enough or a good enough swimmer to make the trip, even with the help of the improvised lifeline.

In these last moments of desperate efforts that saw Bill trying to hang on to little Mike Henley, Raymond Day, fire chief of the Holden Fire Department, held a spotlight on the pair. Bill could be heard to say he could not move his arms. Something had happened.

Bill was heard to cry out, “I am paralyzed.” Then he sank from sight beneath the murky waters of Blackwater Creek. With him went little Mike Henley.

Throughout those long hours just after midnight until after 3 a.m., calls had been going out for those who had boats to bring them to Blackwater Creek and be ready to participate in the rescue of Bill Callaway.

These requests reached another selfless, Christian man, who would heroically answer the call to try to rescue Callaway. That hero’s name was Forrest McKeown.

Forrest brought his boat and he, along with his son Ronnie, arrived at the Highway 131 bridge that spanned Blackwater Creek, prepared to risk his life to help a friend in peril.

At about 1:45 a.m., assisted by others, Forrest launched his boat in the swirling waters. Bystanders who knew he suffered from a heart condition urged him not to take his boat into the treacherous waters.

But he shrugged off these suggestions because he felt it his duty to try to contribute his efforts to the rescue of Bill Callaway.

Forrest and Ronnie had barely reached midstream in the exceedingly swift current when a floating log hit the boat and caused it to capsize only a short distance upstream from the bridge.

The current swept father and son back toward the bridge. Ronnie caught hold of a beam under the bridge and managed to work his way to the bank.

Forrest was swept under the bridge but was caught by the arm by L.M. Carmody and Lester Long as he came out the other side. Moments later, the capsized boat was dashed against the bridge.

For a while, Forrest was able to hold onto the hand of Carmody. Then Lester Long ran to the tow truck, yanked out a tow chain, and dropped it over to Forrest.

When the chain from the wrecker was thrown out, Forrest was able to reach for and grab it. He was almost dragged out of the treacherous waters through the combined efforts of Long and Carmody when he lost his hold and plunged back into the swift current.

In the end, the murky waters of Blackwater Creek claimed another victim that night, as Forrest lost his valiant battle against the unrelenting elements.

On Wednesday morning about 6:30 a.m., July 21, Bill Callaway was found. A very short time later the body of Forrest McKeown was recovered. Long after daylight on Tuesday, little Mike Henley was found in a tree, appearing to hold onto it as he would have in life.

Residents were devastated when they learned of the loss of two of Holden’s beloved family men, as well as the drowning of little Mike Henley.

Neither Callaway nor McKeown at any time during the fateful night that separated Monday, July 19, from Tuesday, July 20, gave one thought for their own safety, but only to saving the lives of those in peril.

The community rightly hailed the two men as heroes and funds were set up to help their families left behind. Bill left a wife and seven children, and Forrest, a wife and five children.

The Holden City Council commended the heroic deeds of the men and the selfless actions that cost them their lives.

“And be it further resolved, that special commendation is given posthumously to William ‘Bill’ Callaway and Forrest McKeown, who both lost their lives in heroic attempts to save the lives of others.”

In the July 22 issue of the Daily Star Journal, it was reported, “It was one of Johnson County’s worst tragedies in years. The two victims in the rescue effort, Bill Callaway and Forrest McKeown, as well as the scores of others, responded to the emergency in the darkness of night, amidst swirling waters, in the true Christian spirit, voluntarily, without fear for their own lives.”

The tragedy would forever change those involved in the rescue efforts, as well as the families left behind.

But, along with the grief and heartache, came a great sense of pride that carries over to this very day.

That dark, stormy night will forever be remembered as a night when the true and good Christian spirit would prevail and many lives were saved, thanks to the valiant, heroic efforts of Bill Callaway and Forrest McKeown.

“Greater love hath no man than this; that he lay down his life for his friends.” John 15:13

Excerpts taken from The 1965 Holden Progress, The Daily Star Journal, and The Sedalia Democrat.