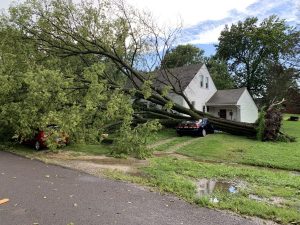 August is proving to be severe weather month for Holden and surrounding communities.

Another strong thunderstorm struck the area last Saturday morning, bringing a deluge of heavy rain, some hail, and damaging winds in excess of 65 mph. A little before 8 a.m. on Saturday, August 15, the National Weather Service issued a severe thunderstorm warning for Western Johnson County.

Radar indicated the primary threats with the storm were noted to be high wind gusts, as well as large hail and frequent lightning.

The storm hit full force, dumping two inches of rain in less than 30 minutes, reminiscent of a storm that occurred earlier in the week.

The powerful, fast-moving storm caught most people off guard, as it wasn’t in the forecast.

The storm cell moved through and brought devastating winds and dangerous lightning.

It caused an enormous amount of damage, with the winds knocking down many large, well-established trees and causing multiple power outages.

Reports of downed power lines began flooding in and most lawns were littered with debris from tree damage and destruction.

The torrential rains caused flash flooding everywhere, and ditches and roadways became small lakes and some were impassable.

Some Holden residents experienced the fury of the brutal storm firsthand, when the excessive gale-force winds brought down a large, 60-ft. tree at the home of Elaine Kuykendall and it crashed right on top of the family’s car.

The car was completely demolished and the home received moderate damage.

Holden Fire & Rescue and JOCO EMA responded to the home and helped with clean-up and damage assessment.

The Red Cross is now assisting the residents of the home.

Many residents were without power throughout the county due to the winds blowing down electrical poles or knocking trees down onto the lines.

Holden, Kingsville, Leeton and Chilhowee were all hard-hit and left in the dark as residents waited for utility companies to repair the power lines and restore service.

Storm-weary residents are now holding their collective breath, worried about what the next storm will bring.

This area has certainly seen its share of violent, severe weather this summer.