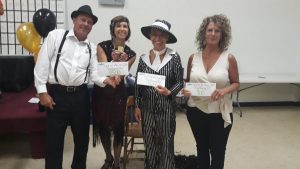 Lucky big money winners!… A good time was had by all who attended the Chamber of Commerce’s annual Luck of the Draw event, held last Saturday. Grand prize winners were Mark and Diane Klossen, who donated $1,000 of their $2,500 winnings back to the Chamber. Other winners were – Danielle Flood, $100; and Shirley Roy, $500. The theme of the 2020 Luck of the Draw event was “The Roaring ‘20s” and those attending donned attire from the speakeasy era. Photo submitted

The Chamber of Commerce’s annual Luck of the Draw was a big hit again this year, with those attending enjoying the evening and winning some fabulous prizes.

The Chamber fundraiser was held last Saturday, July 18, at the Hallar Building.

The 2020 theme was “The Roaring ‘20s” and those attending donned attire from the speakeasy era.

A good crowd came out for the event, in spite of the ongoing coronavirus pandemic. About half of the ticket holders were in attendance, according to Chamber members.

Back by popular demand were emcees Kevin Coleman and Mike Fisher. Suzie DeRouchey was “Vanna” again this year and she assisted with the many prize give-a-ways throughout the evening. 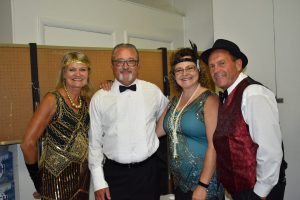 Dapper dressers… The Holden Chamber of Commerce held its annual Luck of the Draw event at the Hallar Building on Saturday, July 18. Pictured, Linda Frazier, Jim and Jenny Sollars, and Mark Klossen show off their “Roaring ’20s” attire for the event’s theme. A night of fun was enjoyed at the 2020 Luck of the Draw with ’20s gangsters and flappers, and a speakeasy vibe filling the Hallar Building. The event was emceed by Kevin Coleman and Mike Fisher. Jamie’s Place catered the dinner. Photo by Steve Edwards

The meal was catered by Jamie’s Place and everyone enjoyed the delicious cuisine.

The big winners of the evening were Mark and Diane Klossen, who won the $2,500 grand prize. The Klossens donated $1,000 back to the Chamber. 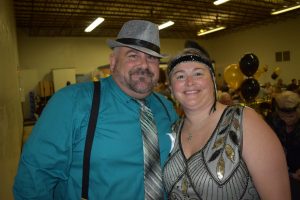 Rip-roarin’ ‘20s attire!… Kaden and Jamie Thieman don speakeasy attire in keeping with the “Roaring ’20s” theme for the night at the Holden Chamber of Commerce’s Luck of the Draw on Saturday, July 18. Jamie’s Place catered the meal for the event. Jamie also handed out prizes to the lucky winners on the night. The event was well attended with the crowd of revelers enjoying the night’s entertainment which was emceed by Kevin Coleman and Mike Fisher. Photo by Steve Edwards

A costume contest was also held, with the theme of the “Roaring ‘20s,” and winners were – first place, Shirley Roy; second, Felipe Castro; and third place, Linda Frazier.

Chamber members appreciate all of the generous donors for helping to make the annual event a success.