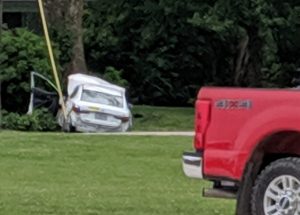 A 2018 Toyota, driven by David Benwell, 64, of Warrensburg, was travelling eastbound on 58 Highway, just west of SW 1081 Rd. when he lost control of the vehicle.

According to a Missouri State Highway Patrol trooper, Benwell’s vehicle ran onto the shoulder of 58, returned to the highway and overcorrected, crossed over the center line and ran off the south side of the road striking a ditch and overturning.

The accident occurred in front of the Jeannae Dickerson home and the vehicle ended up in her yard and ditch.

“I heard the sounds of something going through the lower branches of my trees and looked up and saw a very large piece of metal flying through the air and landing on the ground,” related Dickerson.

“It was one of the bumpers and surrounding metal from one end of the car. It had already landed in the ditch on the other side of the driveway, headed back the way it came from.”

Some concerned neighbors came out when they heard brakes screeching to see if they could help.

A number of first responders arrived on the scene, closed down the highway and summoned the Life Flight Eagle air ambulance due to the nature of the injuries to Benwell.

His condition is not known at this time. The vehicle was a total loss.