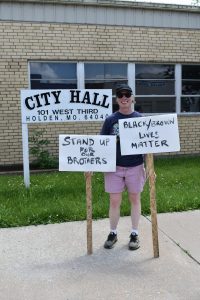 Amid the civil unrest and riots in our country right now with all of the protests going on, Holden boasts its own demonstrator.

Driven by her Christian convictions, Michelle says she felt like now was the time for action and to stand and march in solidarity with black Americans.

Her message of “Black Lives Matter” is a personal acknowledgement of the rampant racism and unfair treatment of people of color in this country.

Michelle was spurred to action, partly by the words of her pastor, Patrick Edwards of First Baptist Church in Warrensburg.

Pastor Edwards preached about why the recent acts of law enforcement should be considered murder, and he also spoke about how indifference perpetuates racism.

The latest riots taking place in this country stem from the death of George Floyd, an unarmed African American man, who was killed by a corrupt police officer in Minneapolis.

But the Black Lives Matter movement is far from a new one. It has been rekindled by the death of George Floyd, but the sentiment goes back many years as people of all races witness the unfair treatment and murders of black Americans.

“I have come to realize that it is not enough that we not be racist, but rather, that we have to be ANTI-racist,” Michelle explains. “As a follower of Jesus, I call on my fellow Christians to stop giving in to indifference.”

Her pastor used a phrase that really hit home with Michelle when he said “…our black and other minority image bearers.”

In the news recently, we have seen the stories of black Americans, Ahmad Arbery, Breonna Taylor, and now George Floyd.

All were killed at the hands of law enforcement officers. They, along with countless others who met the same fate, are why Michelle has taken to the streets in a peaceful protest.

“Ahmad was simply going for a three-mile run when he was hunted down and killed,” relates Michelle. “Breonna, a first responder EMT, was asleep in her bed when police entered her home unannounced and shot her eight times.

“The police were called on George Floyd because he was suspected of paying for cigarettes with a forged $20 bill. “These acts have really brought home to me how I do live in my own world of white privilege.”

Michelle feels a kinship with every American – black, white or brown – as they are all children of God and all mankind was created in the image and likeness of the Creator.

She speaks of her comfort, in this town and this country, saying, “I run through the streets of Holden every morning and go to sleep at night in my peaceful house without ever having to worry about these types of incidents happening to me.

“At some point in my 53 years, I might have even unwittingly circulated a counterfeit bill, but if I were stopped by the police for this, just on my appearance, they would most likely take me at my word that it was a bill that I received instead of manufactured.”

In standing with our black brothers and sisters during this pivotal time in our nation’s history, Michelle believes she is doing what Jesus Christ would do, and she is simply trying to emulate Him.

“I truly believe that this is what Jesus would be doing if he were here with us physically,” she explained.

“This is how I can be the hands and feet of Jesus. I am going to pause and pray for guidance this weekend and then I will be out again next week.”

“I also want my students to know that ‘the power of one’ can make a positive change,” she said. “Even if it is only a small change, it still counts!”

Michelle’s demonstrations have been met with a mixed bag of reactions from the public.

Some support her message, while others disagree with the fact that she is singling out African Americans in her “Black Lives Matter” mantra.

“The biggest push back that I am getting is that people prefer to say ‘All Lives Matter’ instead of ‘Black Lives Matter.’

“I do also agree that all lives matter, but I just say that this is a time when we need to explicitly stand up for our African American and other minority brothers and sisters.”

She explains it this way, “After all, if I go to the hospital for a broken arm, I don’t want them to put a full body cast on me saying that my whole body is important. I would prefer that they invest their time and energy in healing what is actually broken – my arm.

“This is why it is important for me to say that ‘Black Lives Matter.’ This is not about us – it is about supporting and celebrating the black community.”

She shared that the older population tends to disagree with her exclusive message.

“Older people seem to have the most negative reactions,” she says. “Some drive by and shout at me that ‘All lives matter’ and ‘white lives matter too.’” “One older couple wanted to argue with me about affirmative action and why it was wrong.”

However, she believes in what she is doing and is undeterred by those who disagree with her. Michelle plans to continue her demonstrations three to five days a week throughout the summer, and believes her presence can make a difference, even if it’s just in the social consciousness of people.

“I love our town,” she went on to say. “It is full of good, hard-working people. We take care of each other really well.

However, I think that we can be better. “I would like to challenge our citizens to have open minds and to educate themselves against racism. It is important to listen and reflect.

Let’s believe the best about people until proven otherwise.” Michelle realizes that working for social justice, and ending racism will be a long, difficult battle, but it is one she is passionate about and believes in fighting for.