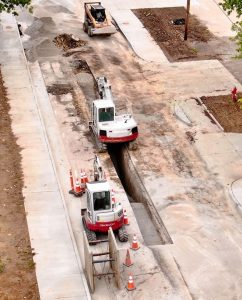 Work continues on the MoDOT project, with crews currently in the final stages on Olive St. The last phase on Olive will be the new surface on the roadway.

Sodding is expected to begin this week and within two weeks, pavers will begin milling and laying a new surface over the highway driving lanes.

Water Superintendent Tony Lerda reports that during the work on Olive St., O&M crews discovered areas of serious deterioration in the sewer main lying beneath the center of the highway.

“Fortunately, we were able to get in there and replace those areas before the new surface was laid,” Lerda said.

“This consisted of several linear feet of new sewer pipe with backfill, compaction, and resurfacing per state specification.

We are grateful for this discovery and that we were able to address it before the MoDOT project was complete.”

As crews began migrating downtown for the beginning stages of the MoDOT project along 2nd Street, Lerda reports there were some discoveries made of underground storm water piping that were previously unknown.

“Due to their size and locations, there will need to be some more discovery work done to understand exactly what is there, where it leads, and how to connect it in with the new storm sewer collection system,” he explained.

“Working together with MoDOT engineers and the workers from Lehman Construction, we hope to be able to trace these pipes using robotic video inspection equipment and smoke testing to help design the best solution.”

Work on 2nd St. was scheduled to begin in two weeks, but because of the new discoveries downtown, that has changed.

Now, construction on the business district will commence later in the year.

Construction will continue however, on Pine St. and moving southward from the downtown area.

So, even with the unexpected discoveries, the project remains ongoing and on schedule.

Residents are asked to continue practicing patience with the construction areas and to be careful while driving near work zones.

We can all keep in mind the big picture – when the multi-million dollar project is finished, Holden will have a brand new look.

The improvements to our town will be more than worth the minor and temporary headaches we are experiencing right now.