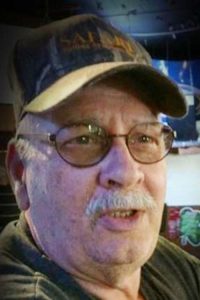 John K. Cimino, 71, Lone Jack, MO, entered into rest on March 20, 2020 at his home after battling cancer. John was born on February 3, 1949 to his parents, John and Sophie Cimino in Sioux City, IA. He was born a resident of South Sioux City, NE where he attended St. Michael’s Catholic School and graduated from South Sioux City High School in 1967. John served in the United States Army, where he was stationed in South Korea during the Vietnam War. He spent years working in the meat processing industry, Gerkin Window Factory, Gateway Computers and Home Depot before his full retirement in 2017. John considered South Sioux City, NE his home but over the recent years he lived in Sioux City, IA, Independence, MO, and finally in Lone Jack, MO. John was united in marriage to Mary (Haahr) Cimino in South Sioux City, NE on August 5, 1995. In a prior union, John and then wife Vickie (Hansen) Krueger raised two sons and a daughter. In his spare time, John enjoyed fishing, hunting, drag racing, sharing stories, and spending time with his family. John was the known joker as he shared humor and sarcasm with those around him. John is survived by his wife, Mary, of Lone Jack, MO. He is also survived by two sons, Chad of South Sioux City, NE and Steve (Shawna) of Emerson, NE; a daughter, Susie (Cody Albertson) of South Sioux City, NE, and a step-daughter, Kristi (Jason) Mace of Lone Jack, MO. John was a proud grandfather to his grandchildren, Dylan Cimino, Madison Albertson, Sophie Cimino, Neveah Cimino and Kaleb Mace. He is also survived by his sister, Mary Jo Dye of Seattle, WA; as well as many nieces and nephews, brothers- and sisters-in-law. John was not a stranger to those in his community of South Sioux City and was considered a friend or family member to many. John also loved and welcomed into his home many four-legged furry friends over his lifetime. John will be in his final resting place at Missouri Veteran’s Cemetery in Higginsville, MO. A private interment service will be arranged, along with a memorial for family and friends at a later time. The family would like to publicly acknowledge Sarah Cannon Cancer Institute at CenterPoint Medical Center. Gratitude goes to the staff at Kansas City Hospice and Palliative Care for their care and support during the past several months.