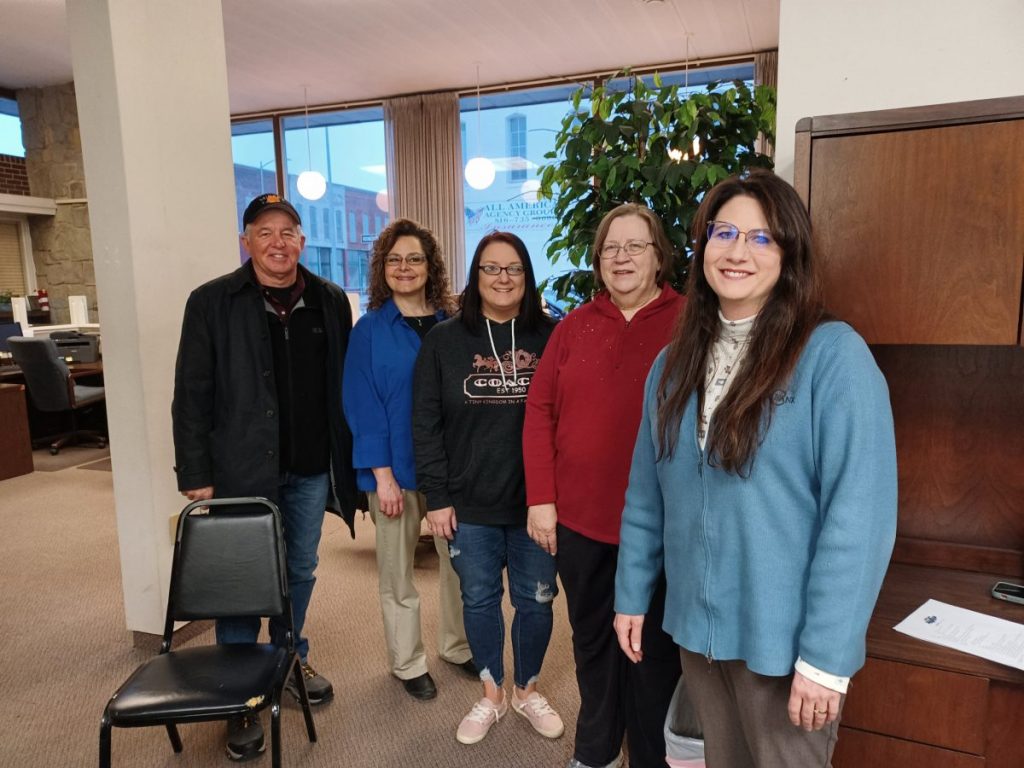 New Chamber Officers… Highlighting the first Holden Area Chamber of Commerce meeting of 2022 was the election of officers for the new year. Those were: (from right to left), President, Jennifer Smithson; Treasurer, Helen Shoemaker; Secretary, Lynette Zimmer; Vice President, Jenny Sollars and Board Member At Large, Dwight Anstine. Photo Submitted

Jennifer Smithson will return as President, while Jenny Sollars will serve as Vice President.

After approval of November minutes and financials, reports from the city and school were given by Ray Briscoe.

Discussion about the repairs to the corner of Pine and 2nd streets followed.

Briscoe noted it’s expected the MODOT project will be officially closed in the near future.

Discussion on winner of the Shop Small sweepstakes ensued and a decision was made continue the promotion next year.

It was reported the Shop Small Saturday was well attended and associated activities went very well.

Many people from other towns were observed shopping and participating.

It was shared ne woman stopped to ask where to park for the best view of the lighted parade and said she and a friend traveled from Kansas City to view it.

In another event, Darcy Roach reported the Holiday Homes Tour had a record number of ticket sales.

She added home owners already are signing up for the December 2022 tour.

Calendar items were reported a the conclusion of the meeting.

Those included: Knot Just For Hair ribbon cutting (which took place Saturday, Jan. 8) and the annual Chocolate Crawl, which is set for Feb.12 from 10:00 a.m. – 2:00 p.m. Darcy Roach is chairing the event.

The Chamber’s largest fundraiser event, The Luck of the Draw, was set for April 2. This year’s theme will be “Pirates.” Tickets will go on sale soon.

Also decided was a return of Cruise Nights.

The event will take place the first Friday of each month, starting in May and running through October.

On a final piece of business, it was noted a large number of candidates have filed for the Holden R-lll School Board as well as for the City of Holden elections in April.

A Meet the Candidates forum will be hosted by the Chamber March 21 to aid voters in getting to know the candidates, their views and positions.

The meeting then adjourned until its next session Feb. 3.