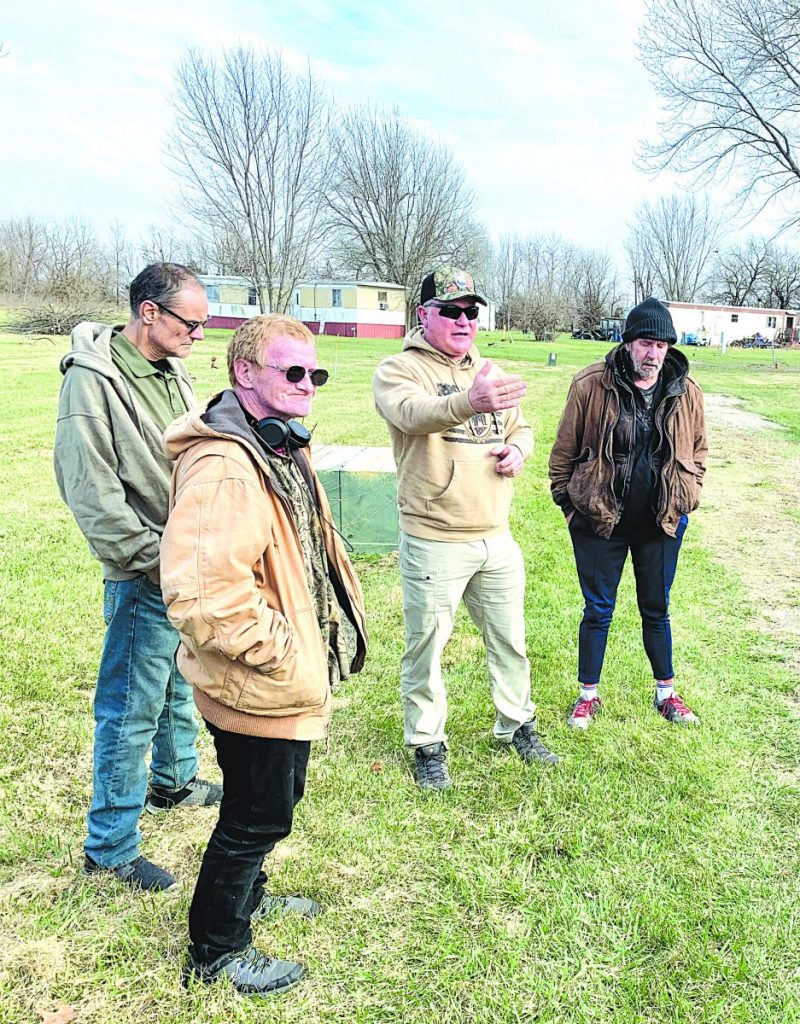 Veterans Welcomed… Three veterans were welcomed to what will be their new homes Dec. 23 when they arrived at Camp Valor Outdoors Veterans Village in Holden. Receiving keys to the recently completed tiny homes were two Army veterans, Mark and James and one Navy vet, David. The trio, all from Warrensburg, will now receive financial, spiritual, physical and psychological assistance with a goal of having a path to job placement and joyful, productive lives. On hand to welcome the men were a contingent of well-wishers and John Schwent (second from right), Retired Marine Major, founder and Director of Camp Valor Outdoors. Photo by John Roberts

Two years after the conception, construction and assistance by community and corporate partners, Camp Valor Outdoors (CVO) welcomed its first three individuals into the Veterans Village in Holden.

In a short ceremony Thursday, Dec. 23, three homeless veterans (all from Warrensburg) were presented the keys to their new homes.

They included Mark (Army veteran), James (Army veteran), and David, (Navy veteran). There, the veterans will be provided with financial, mental, spiritual and physical guidance to achieve a sense of well-being.

The ultimate goal of the training will be to establish a path to job placement and a joyful, productive live.

Leading up to this point has been no easy task for either the developers of the project or the recipients. “We broke ground for the Veterans Village in November of 2018,” said John Schwent, Retired Marine Major, founder and Director of Camp Valor Outdoors (CVO).

However, actual construction didn’t begin until the spring of 2019. “Then in March of 2020, COVID-19 hit,” Schwent added. “And, while we were able to start work, the outbreak hampered the project in several respects.

One was a shortage of workers, all of which were volunteers, and the other was sky-rocketing prices on lumber, as well other building materials.” Schwent went on to say that a lack of skilled laborers factored into the delay of getting the three finished homes ready for occupation. “I give a tremendous amount credit to all of the volunteers who’ve helped in this project,” Schwent continued. “We wouldn’t be where we are today without them. “That said, as we progressed, we, and I include myself, all learned that skilled laborers were part of what needed to get things expertly finished. “Painters, sheetrockers, plumbers, carpenters and cabinet makers were called upon to improve some of our mistakes during construction.” he said.

Due to COVID-19-related supply shortages and delivery, appliance costs doubled and sometimes tripled.

With each tiny home, comes a stove, micro-wave, and refrigerator, so the price increase was no small matter.

Adding to the mounting costs were repairs caused by bad weather. “All three roofs had to be replaced due to high wind damage and guttering was added,” said the Retired Marine Corps Major.

To top it off, there were malfunctions in at least one HVAC unit, requiring new plumbing fittings.

Throughout it all however, Schwent, his board of directors, and his devoted troop of volunteers have persevered and look forward to future plans.

Those include a total of 10 tiny homes and a community center that will house a community kitchen, a couple of double-decker washer and dryers, several desktops and two private offices for counseling.

They hope groundbreaking can take place in the spring.

Camp Valor Outdoors is a local 501c3 and is a 100 percent volunteer organization.

Anyone interested in sponsoring/supporting a tiny home or wanting to volunteer to help is encouraged to contact John Schwent at 816-898-8311 or via email at jschwent@campvaloroutdoors.org.