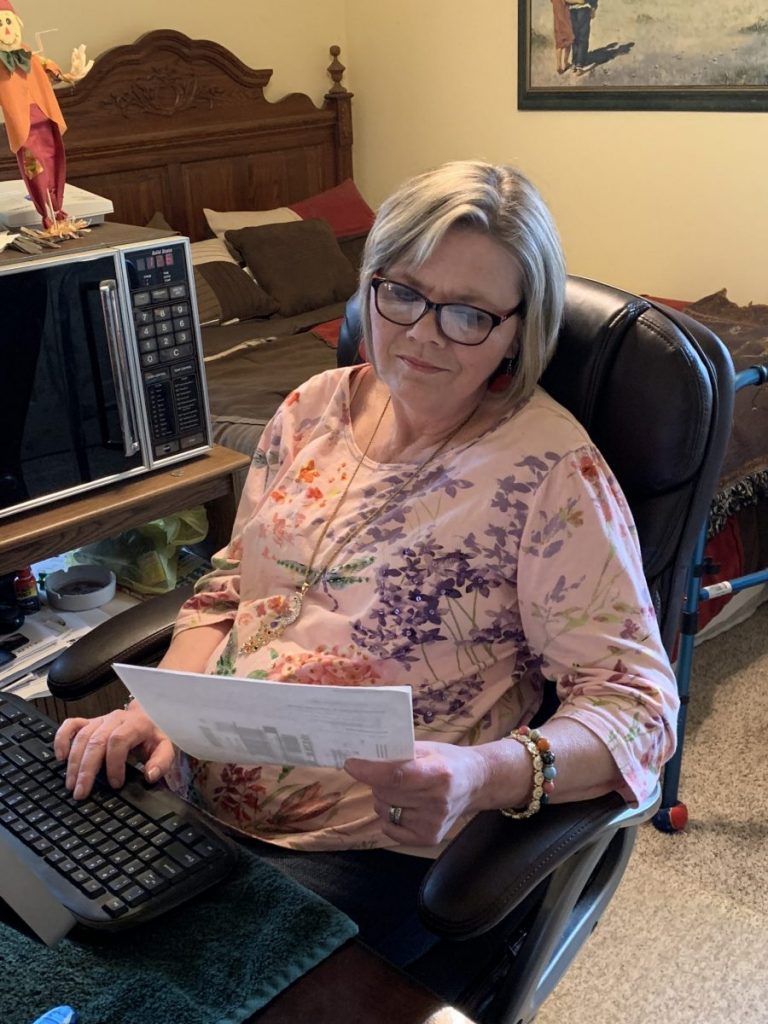 As a profession, journalism has always attracted the passionate and tenacious, those who refuse to throw in the towel even when the odds (and the powerful) are against them. But what do you do when the thing opposing you is yourself, or at least your own body?

Dana Raker is the editor of the Holden Image, where she has worked for the last 18 years. For half of that time, she has also contended with primary lateral sclerosis (PLS), a motor neuron disease that has often left her feeling down but never defeated.

“I was diagnosed with Primary Lateral Sclerosis nine years ago, in 2012. It is a neuromuscular disease that’s very similar to [Amyotrophic Lateral Sclerosis], except it doesn’t have the certain death sentence that ALS carries. People can live many years with PLS, gradually losing motor functions over time,” Raker said.

According to The Mayo Clinic, because ALS, or Lou Gehrig’s disease, and PLS are both progressive motor neuron diseases, the latter is often mistaken for the former, which is much more common.

“When I was first diagnosed, they thought I might have ALS, and the PLS could have gone into ALS anytime within the first three years after diagnosis. So I was living on a wing and a prayer, hoping it didn’t progress into ALS,” she said.

Raker first started having symptoms about two years before her diagnosis.

“It took the doctors a couple of years to narrow down what it was because it is so rare. I was 50 years old when I started having muscle symptoms,” she said. “It is not a hereditary disease, nor had I ever had any illnesses in my life that would explain the onset of PLS. No one knows what causes it and there is no cure or effective treatment.”

After the three-year mark passed following her initial diagnosis and the disease was still what doctors considered PLS, Raker said she breathed a sigh of relief and felt more comfortable with her future.

“You have to conquer your fears and deal with your demons to keep striving to follow your dreams. I just put my foot down and proclaimed that this disease would not dominate my life,” Raker said. “We don’t know what tomorrow has in store for any of us, but we just have to do our very best to make the present as productive and happy as it can be.”

Hometown newspaper
For Raker, being productive and happy means continuing the work she has enjoyed for the better part of two decades.

“It never entered my mind that I would retire from my career at the Image,” Raker said, when asked if she thought about quitting journalismafter her PLS diagnosis. “I always just thought I would keep working and doing other physical things, like walking, as long as I was able.”

Being a community journalist, at her hometown newspaper no less, means the work keeps coming, even if she and the other staff have had to adapt.

“I was born and raised in Holden, and I have a fierce love for and pride in my hometown and want to see it succeed and our people happy,” Raker said. “The Image provides a vital service to our community and although many small-town newspapers have gone the way of the dinosaurs, we are blessed to have survived so far.”

Raker was originally hired as a staff writer by the Image’s previous owner, Rusty Hartwell, a friend from school. Prior to joining the newspaper serving the Johnson County town of about 2,500 people, she spent 13 years with AT&T, including working as a manager in an office with 700 people in it.

“It felt like a rat race to me and I didn’t enjoy it at all,” Raker said. “I just needed a change and longed for a career that was meaningful.

“We are a small hometown newspaper, a dying breed really, but I believe we fill a real need in this community — from covering local news happenings and events, to reporting on the births or deaths of our residents, many of whom I know personally.”

Raker held the staff writer job for two years before being promoted to editor, which has her editing all copy, researching different subjects, writing editorial columns, news stories, features, obituaries, cutlines, social items and many other stories.

All of Raker’s work now is done from her home office, which she was doing years before the coronavirus pandemic forced it on others in the industry.

John Roberts, the Image’s current publisher and owner with wife Sandy, explained that while there was some adjustment, the work continued largely as it always would have.

“Through technology, she can work remotely from her home, conduct interviews by email, gather pictures through our staff or community members and effectively interact through social media to stay on top of breaking news,” Roberts said. He credits Raker’s “love for journalism and dedication to her community” that drives her to keep covering the community.

“The people in this little town have a right to have their voices heard and their stories told, and I feel a responsibility to all of them. They count on me to get their news published and I’m happy and honored to do that for them,” Raker said. “I strive to ensure that what I run in the paper is correct, appropriate and timely, that’s very important to me  – because people are depending on me.”

In March, Raker was recognized by the University of Missouri Johnson County Extension for her contributions to and support of its programs.

Extension wrote in its recognition of Raker, “As editor, Dana is always willing and supportive of assisting in sharing Extension programs and the success of program participants.”

Adjusting to changes
With the adjustments, Raker said there were also some sacrifices to parts of the job that she really liked. “Since we are a small office, I had the responsibility of taking pictures at local events every week, which is something I loved doing and really miss,” she said.

In-person interviews and even talking on the phone are other responsibilities she has had to give up because of PLS’ toll, which affects all of Raker’s muscles and makes even breathing difficult. Her current home office set up came about because of a fall in 2015 that resulted in a broken hip.

Email and social media, along with a large resource list from her years at the newspaper, mean Raker is always able to connect with her sources.
She still uses a traditional keyboard to type but there are adaptive devices if her PLS ever progresses to the point that is no longer possible.

Organizations such as the ALS Association and others have resources and devices — from speech-enhancing devices, to breathing assistance, to computers that adapt to specific needs — available to help people deal with the loss of motor functions.

Raker said there are “bad days,” when she will find herself tiring more easily or her fingers don’t want to cooperate with the work that needs to be done. She makes allowances for those days and refuses to get discouraged or let it keep her from getting work done.

“We’ve had to make adjustments so I can still do my job, but praise God, after nine years of living with PLS, I’m still able to work, at what I hope is a high quality level,” Raker said. “I am blessed with a wonderful support system at home with my husband, Dennis, my mom and niece, the rest of my family, and several close friends who all support and encourage me. If I get down or have rough days, they are always nearby to lift my spirits and help me through the difficult times.”

Raker said she looks forward to going to work every day and doesn’t ever take it for granted. “My work and my writing are very good therapy for me. Cathartic, really. I get lost in my writing and it takes my mind off of the things I can no longer do and the increasing pain that comes with the disease progression,” she said.

Raker said that with advances in technology, if a person with a disability is interested in working, there is likely a way to make it happen.
“I would encourage employers to look past the disability and see the whole person — heart and soul — and what assets and skill sets they can bring to your organization. I feel we have a lot to offer, including empathy for all people, which is an important quality,” she said.

Roberts added it is important to keep an open mind and, as with many things newspaper-related, publishers should be ready to acclimate to changing circumstances.

“Many people who fall under these categories are the most dedicated, reliable employees you could find. Whatever drawbacks they may present, oftentimes can be overcome,” Roberts said. “This is especially true with technology being what it is now and what it will become in the future. In other words, there are workarounds.”

When prompted for advice for others in situations like hers’, Raker offered some wisdom that can help just about anyone.

“I would say to someone who is dealing with what seems to be an impossible situation, lean on your loved ones, have faith in your ABILITY and don’t focus on what you can’t do. Instead, see the glass as half-full and never stop pursuing your passion,” she said.