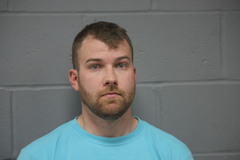 On Tuesday, March 30, at 11:15 p.m., Trent Mikel Neal, 29, of Centerview, was arrested for domestic assault by law enforcement officers.

Neal serves as the Chief of Police for the Holden Police Department.

Neal was booked on felony charges of domestic assault in the third degree and transported to the Johnson County Jail where he was placed on a 24-hour hold.

Neal posted bond, according to the Johnson County Sheriff’s Office.

According to the probable cause statement provided by the Johnson County Circuit Clerk’s office, Neal was involved in an altercation with his spouse on March 30.

Allegedly, he confronted her in the garage of their home asking for her keys while using profane language.

The statement goes on to say Neal then approached her, placed his hands around her neck and shoved her head into a wall.

The victim said she tried to hide from Neal but he retrieved a blue framing hammer and struck her in the head with it.

She reported she lost consciousness after being struck by the hammer.

When she regained consciousness, Neal was no longer in the garage.

She called a friend of hers who then reported the attack to authorities.

The victim reported a pattern of abuse at the hands of Neal but feared she would lose her child if she reported the abuse.

The reporting officer, Trooper A.L. Royster, reported observing several injuries on the victim, including bruises on her face, blood blisters and bruising around her neck, and possibly a broken finger.

He photographed and documented her wounds.

The hammer used in the attack in the garage was seized for evidence.

The victim reported that Neal has a history of abusing her and has assaulted her multiple times each month over the past two years.

According to the statement, she said Neal is always threatening to take their child and tells her he is a police chief.

She told law enforcement that she was afraid she would lose her child or Neal would harm or kill her if she sought help.

Trooper Royster made contact with Neal inside his residence and he gave inconsistent statements regarding the events of the evening in question.

Mayor Doyle Weeks would not comment on the charges and ongoing investigation, except for to confirm that Neal has been placed on paid administrative leave pending the outcome of the investigation.

The Holden City Council was scheduled to meet in special session this week to discuss the issue.

The Image reached out to the Holden Police Department and spoke with Assistant Chief Matt Carter.

He said, “At this time, I, Assistant Chief Matt Carter, have been appointed Acting Chief.

We plan on business as usual, continuing to serve the Holden community. “Due to the pending investigation, we are unable to comment any further at this time. Our thoughts and prayers go out to everyone involved.”

The active case has been turned over to the Missouri State Highway Patrol and the investigation continues.

Johnson County Prosecutor Robert Russell requested the case be transferred to a special prosecutor in Cass County to avoid any concerns about his office in Johnson County handling the case.

Neal has served as Holden’s police chief since 2019.