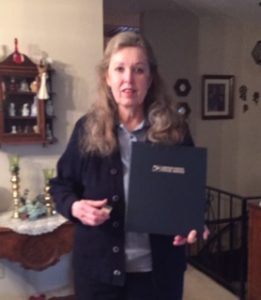 Susan Strate is retiring after 30 years of service at the Holden post office. congratulations Susan!

Long-time employee of the Holden Post Office, Susan Strate, announces she will be retiring on January 29, after 30 years of dedicated service.

Susan’s is a familiar, friendly face that will be missed, along with her outstanding customer service and friendly personality.

She is proud to say she is a third generation postal worker.

Her grandfather, Ray Hough, started in 1967 as a rural substitute carrier for the Holden Post Office.

He worked in that position for eight years. Her mother, Dana Hough Briscoe, started her postal career in 1977 as a rural substitute carrier for the Holden Post Office.

In 1986, Dana became a full-time rural carrier in Kansas City, then later transferred to the Odessa Post Office, retiring in 1997.

Susan began in May of 1989 as a non-career employee.

She was hired as a casual city carrier for two six-month terms at the Holden Post Office.

She later transferred to the position of part-time clerk at Holden.

She remained in that position until December of 2014.

Due to the restructuring of the post office to cut costs, the Kingsville carriers were all moved to the Holden Post Office.

The postmaster position was eliminated in Kingsville and since then, Holden’s postmaster manages the Kingsville office with the assistance of one clerk.

Susan was awarded the clerk position at that time.

An Officer in Charge fills the vacancy of a postmaster until one returns or a new one is appointed.

“It was a privilege in 2006 to have received the Outstanding Customer Service Award given by the Holden Image,” she proudly said.

Susan has seen many changes during her career that has spanned three decades, but she says computers have had the biggest impact on changes at the post office.

“Scanners have been added since I started and are a big part of the daily operation of the post office,” Susan relates.

“They are used to keep track of customer’s parcels.”

She speaks fondly of her many years at the post office, saying, “It has been a rewarding career and a wonderful community to serve.

In retirement, I look forward to finishing projects I started over the years, or just never had time for.

“I am a member of Enon Baptist church and I will continue serving my Lord as He leads me.”

Susan is a lifelong resident of Holden, and graduated from Holden High School in 1973.

She has been married to her husband Gary for 46 years and they own and operate Strate’s Trucking.

Susan and Gary have two children – a daughter, Traci, who is married to John Dale, and a son, Daniel Strate.

Susan enjoys spending time with her twin six-year-old granddaughters, Presley and Audrey Dale and says she plans to have more “Grandma time” with them in retirement.

She is the daughter of Norman Briscoe of Holden and the late Dana Briscoe.

Friends and co-workers are hosting a retirement reception for Susan on Friday, January 29 to celebrate her many years of service and wish her well on her retirement.

The community will certainly miss her smiling face serving them at the post office but all offer congratulations on her retirement.

We, at the Holden Image, offer our best wishes for new adventures and wonderful family time.

Congratulations and thanks Susan, for a job well done! Enjoy your retirement!

Swap & Shop Off To Good Start