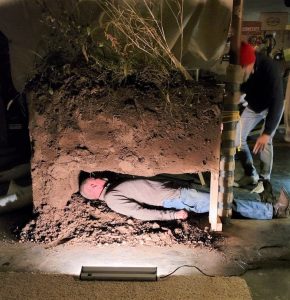 Lying In Repose… Willis Taylor lies in his grave yearning to see his wife and blue skies just once more during the LJHS’s virtual Walk With the Spirits, held last month on Facebook. Photo submitted

The Lone Jack Historical Society was as disappointed as anyone that it was forced to cancel one of its most popular fundraiser events, the annual Walk with Spirits, because of COVID.

Our spirits protested, they wanted their stories heard.

And heard they were. To help the spirits tell their stories, we developed a virtual Walk with Spirits on our Facebook page.

This is a favorite Halloween fundraiser for both our volunteers and people who come “trick-or-treating.”

The Historical Society invited eight spirits to tell their stories as volunteers filmed their efforts to materialize and speak.

With one story a day, our spirits told their stories online.

Normally, in person our spirits share their stories with 200 to 300 people.

Halfway through the series, we had more than 10,500 hits!

That number is more than double the attendance at the 150th battle anniversary Commemoration.

Lucinda Cave rose from her death bed in the Cave Hotel.

The young mother lingered for weeks following the battle. She spoke about leaving her children.

Hunt had joined the search for bodies after the battle.

He took a few minutes to rest and speak to us. Pvt. George Wilcoxen of the 3rd Indiana Artillery shared his thoughts about the battle.

Capt. William Long shared that when Maj. Foster told him to re-take the cannon, he told Foster he “would follow him to Hell.”

Long died in Cass County after having his shattered leg amputated.

The spirit of a young soldier spoke from his final resting place in the cemetery.

Volunteers built a cut-away representation of the trench he now lies in.

While preparing this scene, a white dove drifted down and landed on some plants above the “trench.”

William Roney fought in blue. In 1907, he returned for a battle anniversary.

He was concerned that the government would not raise a marker over the grave of the boys in blue, as the Confederates had done.

He erected the Federal monument in the cemetery himself.

Martin Rice and Ben Potter told their tales of Ewing’s Order #11 and how each lived and died because of it.

This was a labor of love by the behind-the-scenes volunteers and re-enactors who portrayed these spirits.

The Historical Society’s mission at the museum is to tell both sides of the Lone Jack Civil War history so people can learn from it.

We invite you to go to the Historical Society’s Facebook page and view these vignettes or watch them from our website at www.historiclonejack.org at a later date after they have been transferred.

Either way, we hope that you will consider a donation to help us continue to educate the public and tell our stories.