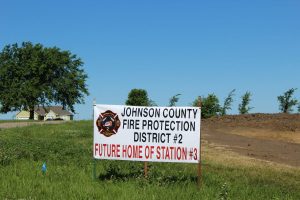 “The new station has been in the works for several years,” says Fire Chief David Miller. “The land was purchased nine years ago and since that time we have been working on plans and a design to find a building that the district could afford.

“This also gave the district time to save money to put toward this project.”

The station will boast several new and exciting, much-needed features, one being storage that firefighters are currently in great need of. Another being an extractor for washing several sets of gear at one time.

There will also be more office space, to include a board meeting room and office space for district officers to use while completing reports and planning trainings.

The district headquarters office will also be located at this new facility for the Chief and the office manager. This location will provide the district with many more options for expansion in years to come.

With that being said, the district has four other stations and there will not be any change in the front-line apparatus or manning of those other stations.

“We want to thank the community for their support for the past 38 years and we are very excited about this project and cannot wait to move into our new facility,” said Chief Miller.