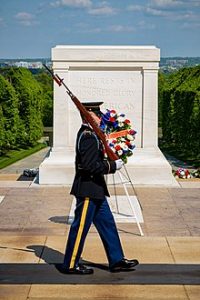 As Americans prepare to celebrate Memorial Day, we are reminded of the many brave soldiers who made the ultimate sacrifice so that we might remain a free people, and be able to live in peace in these United States.

Throughout America’s rich history, the selfless men and women of our Armed Forces have laid down their lives for the sanctity of our country. They gave all for the greater good of our nation.

On Memorial Day, at cemeteries all across our land, brave soldiers are honored and remembered.  Perhaps the most revered and iconic spot to reflect on the lives of those who served is Arlington National Cemetery in Arlington, Virginia.

On a hill overlooking Washington D.C., Arlington is the final resting place of many of our war heroes, and even some presidents.

Arlington is a beautiful, serene memorial for this nation’s veterans.

One of the most visited sites in the cemetery is the Tomb of the Unknown Soldier. The Tomb is the final resting place for unidentified soldiers from WWI, WWII and the Korean War.

There was also an Unknown from the Vietnam War, who rested there for 14 years until he was identified and later removed.

The crypt designated for the Vietnam Unknown remains vacant and on September 17, 1999 – (National POW/MIA Recognition Day) – it was rededicated to honor all missing U.S. service members from the Vietnam War.

The empty crypt is now inscribed with the words, “Honoring and Keeping Faith with America’s Missing Servicemen, 1958-1975.”

Inscribed on the back of the Tomb are the words: “Here rests in honored glory an American soldier known but to God.” The first Unknown was laid to rest at Arlington on March 4, 1921, and was a soldier from WWI.

All of the Unknown Soldiers have lain in state in the Capitol Rotunda prior to burial.

Tens of thousands of people have lined up to walk by the caskets and pay their respects.

Prior to interment, Medals of Honor were awarded by the President, and a bugler played Taps, followed by the battery firing a 21-gun salute. The Unknown Soldiers are finally home.

In the years following that first burial of the WWI Unknown, thousands of people flocked to Arlington National Cemetery to pay their respects at the Tomb, which soon came to symbolize the sacrifices of all American service members.

While the Tomb drew many respectful mourners, it also became a tourist destination.

Photographers stationed themselves by the Tomb and charged people to take their picture, and visitors left trash strewn around the site.

Because of the mess and disrespect by some visitors, Congress established a military guard to protect the Tomb in 1926.

At midnight on July 2, 1937, the first continual guard of the Tomb began. Since that time, for the last 83 years, the Army has maintained a constant 24/7 guard over the Tomb.

Sentinels keep a continuous vigil over the Tomb, regardless of weather. In the midst of rain, sleet, snow, hail, thunderstorms and heat waves, the “Old Guard” is on duty at the Tomb of the Unknown, 365 days a year.

The Old Guard annually participates in more than 6,000 Changing of the Guard ceremonies, an average of 16 per day.

The soldier “walking the mat” does not wear rank insignia, so as not to outrank the Unknowns, whatever their ranks may have been.

The military guard at the Tomb of the Unknown Soldier is changed in an elaborate ceremony which happens every hour on the hour from October 1 through March 31, and every half-hour from April 1 through September 30.

Twenty-four hours a day, soldiers from the 3rd U.S. Infantry Regiment, known as “The Old Guard,” stand watch over the Tomb.

The Tomb Guards, also called Sentinels, are chosen for this prestigious and highly selective post only after rigorous training and a demanding series of examinations.

The Old Guard has held this distinguished duty since 1948. During the Changing of the Guard, the relief commander conducts a detailed white-glove inspection of the sentinel’s weapon, checking each part of the rifle once.

Then, the relief commander and the relieving Sentinel meet the retiring Sentinel at the center of the black mat in front of the Tomb. All three salute the Unknown Soldiers who have symbolically been given the Medal of Honor.

The relief commander orders the relieved Sentinel, “Pass on your orders.” The current Sentinel commands, “Post and orders, remain as directed.” The newly posted Sentinel replies, “Orders acknowledged,” and steps into position on the mat.

When the relief commander passes, the new Sentinel begins walking at a cadence of a strict 90 steps per minute.

The number 21 symbolizes the highest military honor that can be bestowed – the 21-gun salute. Next, the Sentinel executes a sharp “shoulder-arms” movement to place the weapon on the shoulder closest to the visitors, signifying that he or she stands between the Tomb and any possible threat.

It is an elaborate ceremony and one that occurs like clockwork without fail 365 days a year, in front of the Tomb.

This country places high regard on our Unknown Soldiers and all of our war dead and protects their final resting places meticulously.

This Memorial Day take a minute amidst your barbecues and camping trips and remember the solemn reason for the holiday.

A culture that holds its war dead in such elevated esteem must surely have high regard for all life and liberty, and for all sacrifices given for our country. And it is just part of what makes us proud to be Americans!