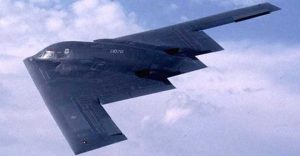 Whiteman Air Force Base pilots are scheduled to fly over medical facilities in Warrensburg, Sedalia and Kansas City Tuesday, April 28 to honor and express Team Whiteman’s gratitude for all medical and healthcare professionals, essential employees, and volunteers in the fight against COVID-19.
The flyover will include a B-2 Spirit stealth bomber, assigned to the 509th Bomb Wing, accompanied by A-10 Thunderbolt IIs from the U.S. Air Force Reserve’s 442nd Fighter Wing, and T-38 Talon’s, assigned to the 13th Bomb Squadron.
The aircraft will pass, in sequence, over Centerpoint Medical Center, Children’s Mercy Hospital North and South, Lee’s Summit Medical Center, St. Luke’s East Hospital, Research Medical Center, St. Luke’s Hospital Plaza, Western Missouri Medical Center and Bothwell Regional Health Center on Tuesday morning starting at 10 a.m.
In case of inclement weather, the flight will be rescheduled for Wednesday, April 29. If the postponement occurs, watch for the update on this website.
“We are in this fight together. We have deep gratitude for all doctors, nurses, medical personnel and other essential employees and volunteers who are confronting this challenge worldwide – but especially in our region,” said Col. Jeffrey Schreiner, 509th Bomb Wing Commander and Independence, Missouri, native.
“While defending the homeland has taken a new shape, we are proud to serve alongside those who serve in and out of uniform. This flyover is our way of sending a heartfelt salute and ‘Thank You’ to all those on the front lines in the fight against this virus.
“Without their dedication and hard work, we would not be able to execute our vital, strategic mission.”
Local residents can expect to see America’s stealth bomber from various vantage points across the countryside at approximately 10 a.m. as the B-2, A-10s and T-38s fly over major regional medical centers.
All residents are encouraged to follow strict social distancing guidelines and refrain from gathering in large viewing groups.
Area residents will also be able to join Whiteman Air Force Base during this event from the comfort of their homes by visiting www.facebook.com/whitemanafb for ongoing virtual coverage.
The U.S. Air Force performs almost 1,000 flyovers each year, to include air shows, national-level sporting events, and any event in support of a patriotic holiday.
Flyovers are fully functional training missions, designed to maintain the lethality and readiness of Air Force pilots and maintainers.
They are conducted at no additional cost to taxpayers and are incorporated into existing flying schedules.